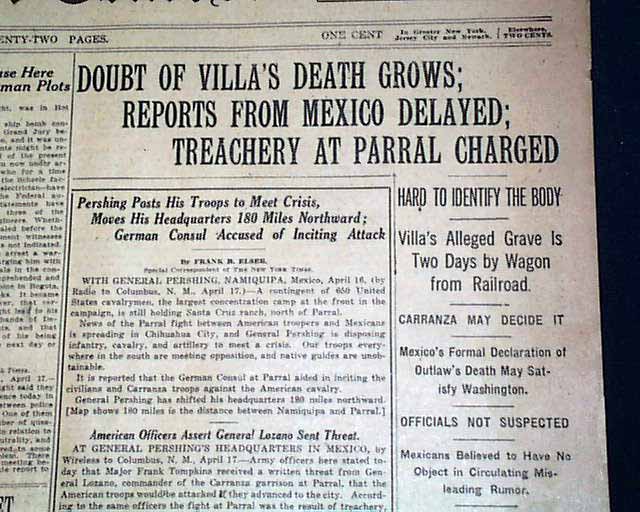 This 22 page newspaper has a three line, three column headline on the front page: "DOUBT OF VILLA'S DEATH GROWS; REPORTS FROM MEXICO DELAYED; TREACHERY AT PARRAL CHARGED" with many subheads. This was a false report as Pancho Villa did not die until 1923.
Other news of the day throughout. Usual browning with some margin chipping. Should be handled with care.

source: wikipedia: Doroteo Arango Armbula (June 5, 1878 - July 23, 1923) better known as Francisco Villa or, by the nickname for Francisco "Pancho". Pancho Villa was one of the foremost leaders of the Mexican Revolution and provisional governor of the state of Chihuahua in 1913 and 1914. Villa mostly operated in the northern theatre of the war, centering on Chihuahua, in the north of Mexico. Villa is often referred to as El centauro del norte (The Centaur of the North), due to his celebrated cavalry attacks as a general. Numerous streets and neighborhoods in Mexico are named for Villa. In the United States, Villa is principally remembered for his 1916 raid on Columbus, New Mexico, that provoked the Punitive Expedition commanded by General John J. Pershing, although the raid itself was a fairly minor event in Villa's military campaign history.

Villa and his supporters, known as Villistas, employed tactics such as propaganda and firing squads against other allies, expropriated hacienda land for distribution to peasants and soldiers, and robbed trains and printed fiat money to pay for Villa's cause. Villa's generalship was noted for its speed of movement of his forces by railroad, use of cavalry and artillery attacks, and recruitment of enlisted soldiers of enemy units he defeated. Many of Villa's tactics and strategies were adopted by later 20th century revolutionaries.

At the peak of his power (c.1914-1916), Villa controlled the majority of northern states (Zapata commanded the southern armies). His elite cavalry troops and bodyguards were known as Los dorados (The Golden Ones).

As one of the major (and most colorful) figures of the first successful popular revolution of the 20th century, Villa's notoriety attracted journalists, photographers, and military freebooters of both idealistic and opportunistic stripe, from far and wide.

Villa's revolutionary aims (other than military goals), unlike those of Emiliano Zapata's Plan de Ayala, were not clearly defined. Villa spoke vaguely of creating communal military colonies for his troops, and he subscribed to Venustiano Carranza's Plan of Guadalupe.

Despite extensive research by Mexican and foreign scholars, many of the details of Villa's life are in dispute.