Home > Back to Search Results > Sickles is found not guilty...
Click image to enlarge 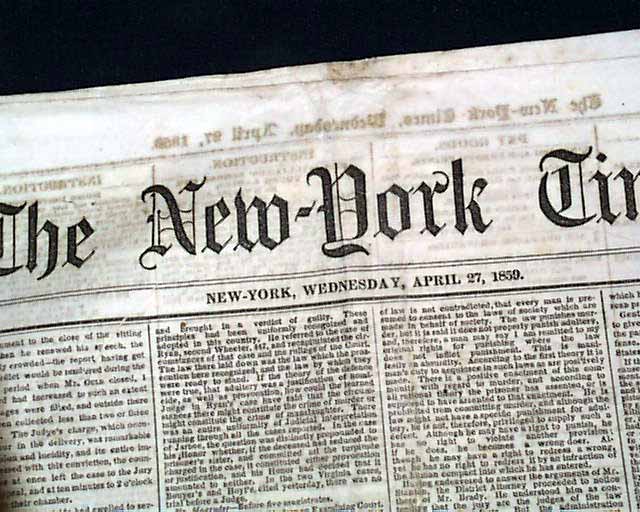 Sickles is found not guilty...

The front page is entirely taken up with reports on:

* "The Sickles Tragedy" and its final verdict, it being: "Verdict Of Not Guilty". This was the trial of Congressman Daniel Sickles for the murder of Philip Barton Key, son of Francis Scott Key.

It created a national sensation because of the lurid details, as Sickles suspected Key of having an affair with his wife, and when caught pursuing her he shot him at point blank range shouting, "You must die! You must die!".

Sickles' defense ultimately was that he could not be held responsible because he was driven insane by the knowledge his wife was sleeping with Phillip Key. This was the first use of the "insanity plea" for a murder case. Among the first column headlines are: "The Sickles Tragedy" "Trial of Daniel E. Sickles for the Murder of Philip Parton Key" "Verdict Of Not Guilty" "Extraordinary Scene of Excitement in the Court-room" "How the Verdict was Received" "Mr. Sickles Carried Off in Triumph by His Friends" and more.

Not only does this extensive reporting take the entire front page but it carries over to take most of a column on the back page.