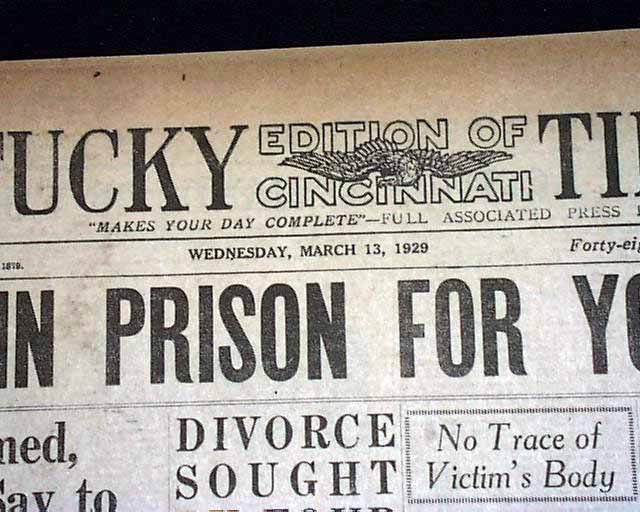 This 44 page newspaper has a two line, two column headline on page 17: "Candler's Life Romance of American Business" with subhead: "Death Ends Career of Soft Drink Manufacturer". Other news of the day throughout. Some browning with some margin wear, otherwise in good condition.

Asa Griggs Candler (December 30, 1851 - March 12, 1929) was an American business tycoon who made most of his money selling Coca-Cola. He also served as mayor of Atlanta, Georgia from 1916 to 1919. Candler Field, the site of the present-day Hartsfield-Jackson Atlanta International Airport was named after him, as is Candler Park in Atlanta.

Candler was born in Villa Rica, Georgia. He began his business career as a drugstore owner and manufacturer of patent medicines. In 1887 he bought the formula for Coca-Cola from its inventor John Pemberton and several other share-holders for $2,300. The success of Coca-Cola was largely due to Candler's aggressive marketing of the product. Candler made millions of dollars from his investment, allowing him to establish Central Bank and Trust Company, invest in real estate, and became a major philanthropist for the Methodist Church. He gave $1 million dollars plus a land gift to Emory University, at that time a Methodist college, for the school to move from Oxford, Georgia to Atlanta. This gift was influenced by Asa's younger brother Methodist Bishop Warren Akin Candler who became president of Emory. Candler also gave millions to what would later become Emory Hospital. The school's original library which now houses classrooms and a reading room is named for him, as well as endowed chairs in the school's Chemistry department.[citation needed]

In 1906 he completed the city's tallest building, the Candler Building, whose intricately detailed 17 stories still stand at Peachtree and Auburn. Candler became mayor of Atlanta in 1916 and ended his day-to-day management of the Coca-Cola Company. As mayor he balanced the city budget and coordinated rebuilding efforts after the Great Atlanta fire of 1917 destroyed 1,500 homes. In 1919 he gave most of the stock in The Coca-Cola Company to his children, who later sold it to a group of investors led by Ernest Woodruff. In 1922 he donated over 50 acres of his Druid Hills holdings to city for what became Candler Park. Candler suffered a stroke in 1926 and died March 12, 1929. He is buried at Westview Cemetery.