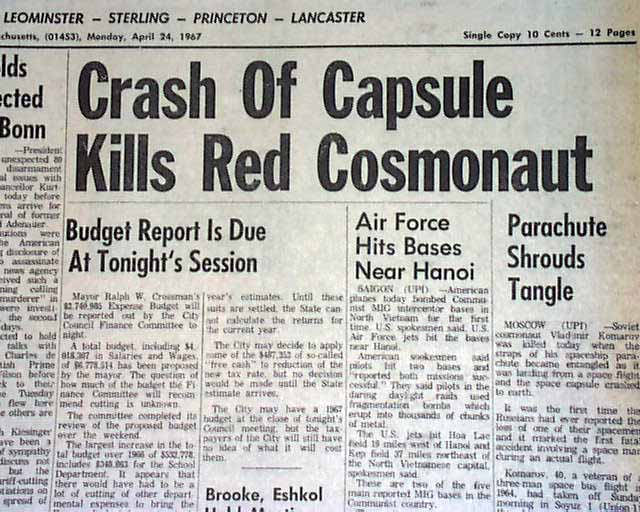 This 12 page newspaper has a two line, four column headline on the front page: "Crash Of Capsule Kills Red Cosmonaut" with subhead: "Parachute Shrouds Tangle". Other news of the day throughout. Small bindings along the spine, otherwise in good condition.

source: wikipedia: Vladimir Mikhailovich Komarov (Russian: March 16, 1927 - April 24, 1967) was a Soviet cosmonaut. He was the first confirmed human to die during a space mission, on Soyuz 1, and the first Soviet cosmonaut to travel into space more than once.

He was born in Moscow, USSR (now Russia).

He was selected to become a cosmonaut in 1960 with the first cosmonaut group. After being the backup for Pavel Popovich on Vostok 4, his first spaceflight was with the Voskhod 1 mission. On his second flight, Soyuz 1, he was killed during a return, when the spacecraft crashed owing to failure of the parachute.

Just before impact, Soviet premier Alexey Kosygin told Komarov his country was proud of him. An American NSSA listening post in Istanbul noted Komarov's reply was inaudible, though persistent rumours stated that Komarov died cursing the spacecraft designers and flight controllers. Whatever the truth of the matter, a tape from a West German tracking station bearing some of Komarov's brief phrases was forwarded to the Command-Measurement Complex of the Soviet Union after the disaster and was reported to contain the word "killed", mixed in with Komarov's distraught unclear transmissions, among other flight data recorded on radio by the West Germans. The recording was made, apparently, on one of the last orbits, if not the final one.

Komarov was married to Valentina Yakovlevna Kiselyova and had two children, Yevgeni and Irina.