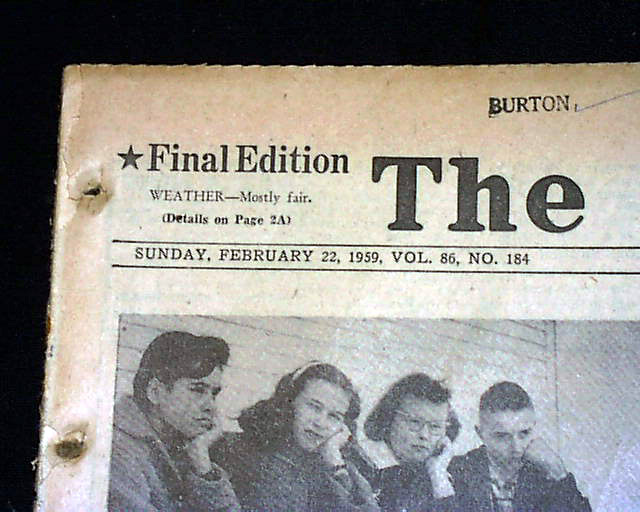 This 60+ page newspaper has a three column headline on page 4-D: "134 MPH Speed Wins at Daytona" which tells of the very 1st race at Daytona International Speedway. This was a 200 mile race which sounds like what would be the modern day Busch Series race because the next day their was the 1st 500 mile race there which of course would be the 1st Daytona 500 held at the new track. Other news of the day throughout. Little margin wear and small binding holes along the spine, otherwise good.

Background Information: NASCAR was founded by William France Sr. and a small group of fellow race promoters at Daytona Beach, Florida in 1947. The original premiere event in the series was held at the Daytona Beach Road Course. France began planning a new track for the premiere event in his fledgling series in 1953. On August 16, 1954 he signed a contract with city officials to create this new track that would become famous as the Daytona International Speedway. Ground was broken on November 25, 1957. The soil underneath the banked corners was dug from the infield of the track, and the large hole in the infield was filled with water and is now known as Lake Lloyd. The speedway opened on February 22, 1959 to a crowd of 41,000 people.

The Daytona 500, the most important race for NASCAR's premier series, is held annually at Daytona International Speedway. It is a 200-lap, 500 mile (805 km) stock car race. The list of Daytona 500 winners is very long dating back to the inaugural race in 1959, and includes Richard Petty, A.J. Foyt, Mario Andretti, and Dale Earnhardt.

NASCAR , the premier stock car organization in the United States, holds some of its most important races on this track. These include competitions in its Craftsman Truck Series (where pickup trucks are raced), Busch Series (the stock car junior league), and Nextel Cup series. The 24 Hours of Daytona is also held at Daytona.

Lights were installed in 1998 so that the Pepsi 400 could be held at night. However, the race was delayed until October that year due to thick smoke from wildfires that summer. The Pepsi 400 has been held under lights ever since.

It is one of the two tracks on the circuit that uses restrictor plates to slow the cars down due to the high banking, the other being its sister track in Talladega. However, there are some differences in the racing at the two tracks, as Daytona is narrower and more handling-oriented than Talladega, which allows the huge packs to break up somewhat on long runs, which makes "the Big One" that plate tracks are famous for less frequent and usually on a start or restart, as opposed to Talladega, where such huge wrecks occurs in almost every race in almost any situation.

It also contains an attraction called Daytona USA. The winning car from the Daytona 500 is placed inside the attraction building each year.