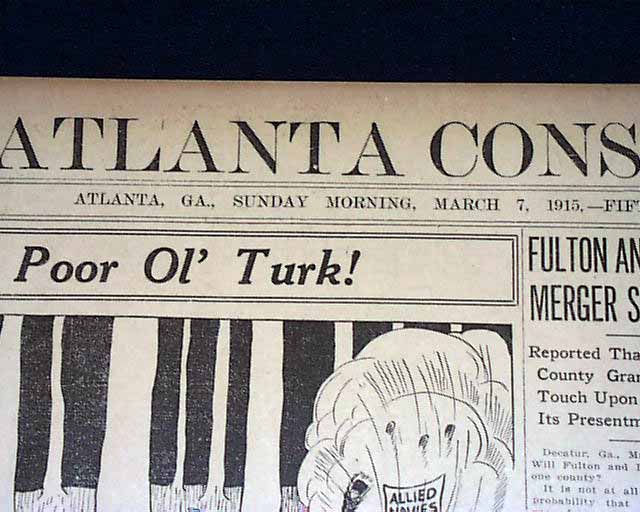 This 20+ page newspaper has a two line, one column headline on page 12 (sports section): "VANDY CUP RACE WON BY RESTA" with subhead: "Englishman Captures Second Big Classic in Two Weeks at Panama-Pacific Exposition". Other news of the day throughout. Usual browning with little margin. Slightly pulpish, handle with care.

Background Information: Dario Dolly Resta (1884 - September 2, 1924) was an Italian race car driver born in MilanItaly. Raised in England from the age of two, Resta began racing there, setting a record of 95.7 mph in a half-mile run. After competing in Grand Prix motor racing in Europe, including the 1913 French Grand Prix, in early 1915 he was brought to the United States by Alphonse Kaufman to drive Kaufman's Peugeot. In February he won the United States Grand Prix at San Francisco followed by a victory in the Vanderbilt Cup. After leading during the final stages of that year's Indianapolis 500, he finished second to Ralph DePalma when his car skidded and he had to make a pitstop for tires. Resta then drove his blue Peugeot to victory in the inaugural 500 mile race on the board track at the Chicago Speedway on June 26, 1915. The race received eighteen pages of coverage in the July 1, 1915, issue of Motor Age magazine.

The following year, enroute to winning the United States National Driving Championship, Resta repeated as winner of the Vanderbilt Cup plus he won the Indianapolis 500, the Chicago 300, the Minneapolis 150 and the Omaha 150 races.

He raced very little after 1916 but in 1923 made another attempt at Indy again, was but forced out of the race after 225 miles. Racing in Europe, Resta finished 3rd in the Penya Rhin Grand Prix, and won the voiturette class at the Spanish Grand Prix. He drove for Sunbeam in the 1924 season with teammates Henry Segrave and K. Lee Guinness.

Dario Resta was killed in 1924 at the age of 40 when his race car crashed at the Brooklands racecourse in England while trying for a new land speed record. source: wikipedia