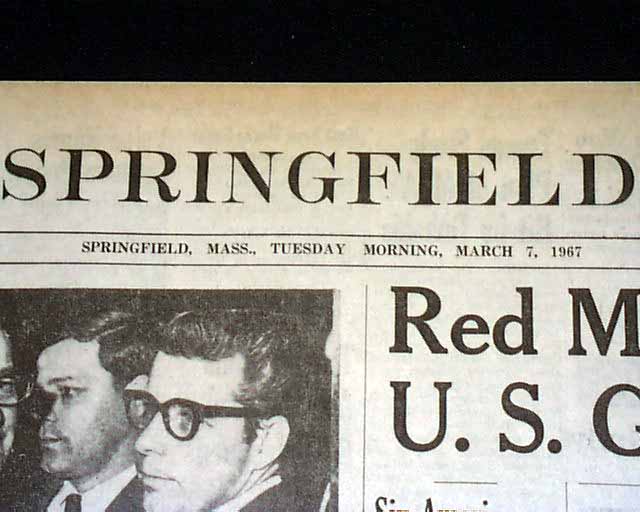 This 34 page newspaper has a three line, one column headline on page 16: "Nelson Eddy, Former Movie Idol, Is Dead" with subhead: "Dashing Baritone, 65, Victim of Stroke That Felled Him on Stage". Other news of the day throughout. Good condition.

Background Information: Nelson Ackerman Eddy (born June 29, 1901; died March 6, 1967) was an Americansinger who appeared in 19 musical films during the 1930s and 1940s, as well as in opera and on the concert stage, radio, television, and in nightclubs. Although he was a classically trainedbaritone, he is best remembered for the eight films in which he costarred with soprano Jeanette MacDonald.

During his 40-year career, he earned three stars on the Hollywood Walk of Fame (one each for film, recording, and radio), left his footprints in the wet cement at Grauman's Chinese Theater, earned three Gold Records, and was invited to sing at the third inauguration of PresidentFranklin Delano Roosevelt. He also introduced millions of young Americans to classical music and inspired many of them to pursue a musical career. source: wikipedia