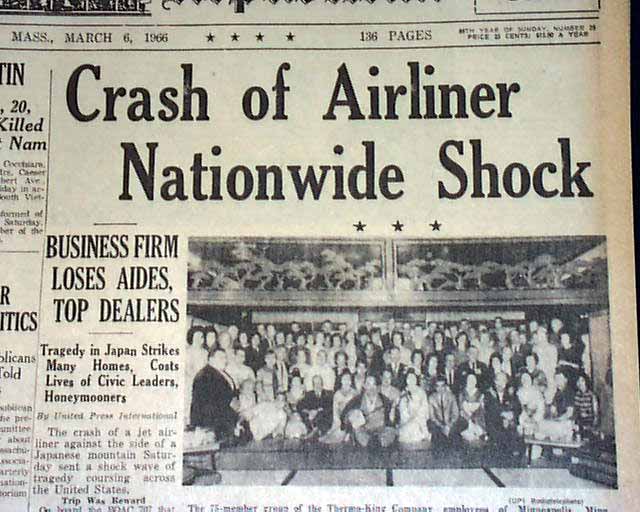 This 50+ page newspaper has a two line, four column headline on the front page: "Crash of Airliner Nationwide Shock" with subheads that include: "Tragedy in Japan Strikes Many Homes, Costs Lives of Civic Leaders, Honeymooners" and more with realted photo. Other news of the day throughout. Minor margin wear, otherwise in good condition.

Background Information: BOAC Flight 911 was a round-the-world flight operated by British Overseas Airways Corporation. A Boeing 707 (registration G-APFE) operating as flight 911 crashed near Mount Fuji while flying the Tokyo-Hong Kong segment on March 5, 1966.
Possibly with the intention of shortening the flying time to Hong Kong, the captain of the flight elected not to follow the usual southbound departure from Tokyo toward the island of Izu Oshima. Instead, he followed a more direct westbound route, passing over Mount Fuji.

Around 2:15 PM, the aircraft encountered a burst of mountainside turbulence which was strong enough to cause the aircraft to break up in midair. The aircraft fell to the ground in the city of Gotenba.

All 113 passengers and 11 crew members were killed in the disaster, including a group of 75 Americans on a group tour of Japan and Southeast Asia. The crash was photographed by Japan Self-Defense Forces personnel at the nearby Fuji Training Base, and 8-millimeter film taken by one of the passengers also survived the crash.
Several passengers decided to cancel their tickets at the last moment in order to see a ninja demonstration. These passengers, Cubby Broccoli, Harry Saltzman, Ken Adams, Lewis Gilbert and Freddie Young, were in Japan scouting locations for the fifth James Bond film, You Only Live Twice.

It was one of five fatal commercial aircraft disasters in Japan in 1966, occurring the day after Canadian Pacific Airlines flight 402 crashed and burned upon landing at Tokyo International Airport. source: wikipedia