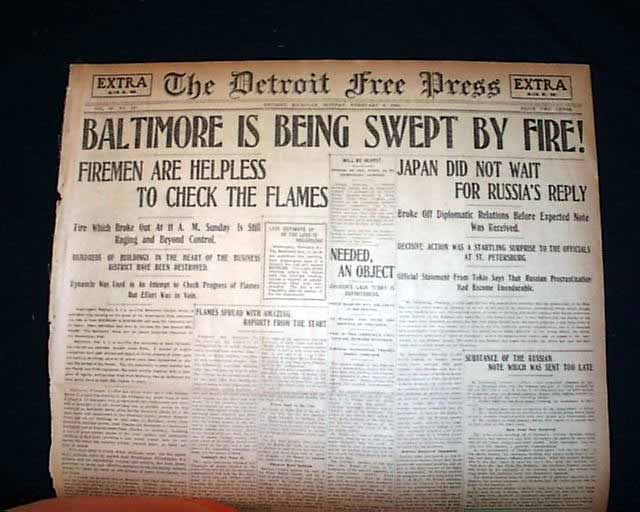 
This 8 page newspaper has a nice banner headline on the front page: "BALTIMORE IS BEING SWEPT BY FIRE" with subheads that include: "Firemen Are Helpless To Check The Flames" and more. Other news of the day. Great for display. Browned with margin wear. Must be handled with care.

The fire was reported first at the John Hurst and Company building at 10:48 a.m. and quickly spread. By 1:30 p.m., units from Washington, DC, were arriving. To halt the fire, officials decided to use a firewall, and dynamited buildings around the existing fire. This tactic, however, was unsuccessful.

One reason for the fire's duration was the lack of national standards in fire-fighting equipment. Although fire engines from nearby cities (such as Philadelphia and Washington, as well as units from New York City, Wilmington, and Atlantic City) responded, many were useless because their hose couplings failed to fit Baltimore hydrants. As a result, the fire burned over 30 hours, destroying 1,526 buildings spanning 70 city blocks.

Immediately afterward, Mayor Robert McLane was quoted in the Baltimore News as saying, "To suppose that the spirit of our people will not rise to the occasion is to suppose that our people are not genuine Americans. We shall make the fire of 1904 a landmark not of decline but of progress." He then refused assistance, stating "As head of this municipality, I cannot help but feel gratified by the sympathy and the offers of practical assistance which have been tendered to us. To them I have in general terms replied, 'Baltimore will take care of its own, thank you.'" Two years later, on September 10, 1906, the Baltimore-American reported that the city had risen from the ashes and "One of the great disasters of modern time had been converted into a blessing."

It was long believed that no lives were lost directly to the fire. Many books written on the Great Fire said no deaths occurred as a direct relation to the fire, and a plaque that commemorates the Great Fire also reads "Lives Lost: None." However, a recently rediscovered Baltimore Sun newspaper story from the time tells of the charred remains of a "colored man" being pulled from the harbor, near the area where the USS Constellation is docked in modern times, days after the fire. Why this death was ignored for almost a century is unknown, though racism may have played a role.

In the aftermath, 35,000 people were made unemployed. After the fire, the city was rebuilt using more fireproof materials, such as granite pavers.

H. L. Mencken survived the fire, but the offices of his newspaper, the Baltimore Herald, were destroyed. He relates the fire and its aftermath in the last chapter of Happy Days, the first volume of his autobiography. He writes that he enters a boy, "fueled by the hot gas of youth, and emerged almost a middle-aged man."

The fire is also memorialized in the folk song "Baltimore Fire."