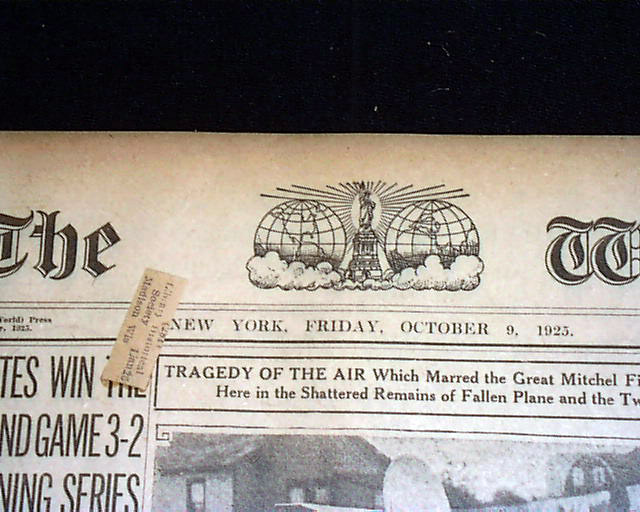 THE WORLD, New York, October 9, 1925  This 32 page newspaper has a two line, two column headline on page 9: "John Heydler Pays High Tribute to Mathewson" with subhead: "Says Big Six Typified All That Was Best in the National Game". Another headline on the same page reads: "Mrs Mathewson Rejects Military Escort for Body" with subhead: "Widow of Pitcher Fears Exertio Might Imperil Ailing Fellow Legionaries". More. Nice to have in a New York title. Lots of World Series reports as well with box scores. Other news of the day throughout. Light browning with little margin wear, otherwise in good condition.

Background Information: Christopher "Christy" Mathewson (August 12, 1880 - October 7, 1925), nicknamed "Big Six", "The Christian Gentleman", or "Matty", was a right-handed pitcher in Major League Baseball. He played in what is known as the dead ball era and in 1936 was elected into the Baseball Hall of Fame as one of its inaugural members. source: wikipedia