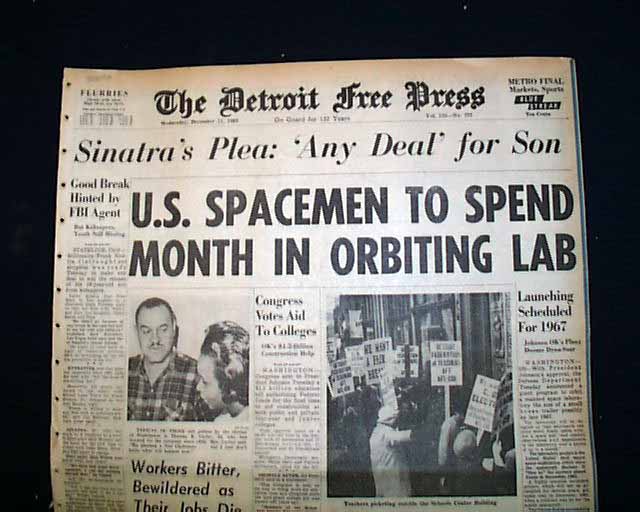 This 44 page newspaper has a nice banner headline on the front page: "Sinatra's Plea: 'Any Deal' for Son" with subheads that include: "Good Break Hinted by FBI Agent", "But Kidnappers, Youth Still Missing". He would be found on this same day. Other news of the day throughout with interesting advertisements. Small binding holes along the spine, otherwise in good condition.

Historical Background: He was kidnapped in December 8, 1963 at Harrah's Lake Tahoe and released two days later after his father paid out the US$240,000 ransom demanded by the kidnappers, who were later captured, prosecuted, convicted, and sentenced to long prison terms. Gladys Root represented one of the kidnappers. In order to communicate with the kidnappers via pay telephone, as per their demands, the senior Sinatra carried a roll of dimes with him throughout this ordeal, which became a life-long habit. Frank Sinatra, Jr. did not seem to be overly scarred by this event. The kidnapping has been later explained in Act Three of the "Plan B" episode from the radio narrative show, This American Life by Barry Keenan, one of the kidnappers. The kidnapping is portrayed in the 2003 made-for-TV movie Stealing Sinatra, which is based on Barry Keenan's story.

At the time of trial, Keenan attempted to make it appear that Sinatra Jr. himself was a willing conspirator in his own kidnapping. This allegation didn't stand up in court, but still proved to be fodder for late-night TV jokes and negative publicity for Frank Jr.'s career. source: wikipedia