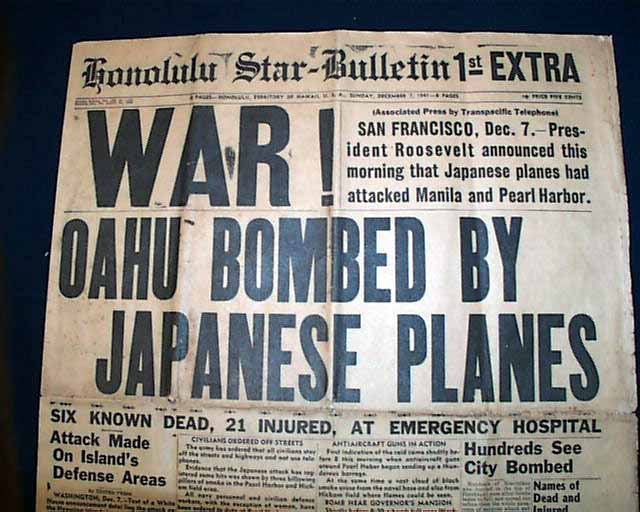 
HONOLULU STAR BULLETIN, 1st EXTRA, Dec. 7, 1941  This is the "biggie", the issue announcing the bombing of Pearl Harbor most desired by collectors everywhere. A very well publicized issue, but rarely found as a "genuine" issue.
See the photos for the terrific and historic headlines. This is the famous "1st Extra" edition being the earliest of the four editions on Dec. 7 (we have a few of the other rare editions as well--inquire). This issue contains the earliest printed source closest to the attack, and is filled with eyewitness accounts.  Huge & dramatic headlines on the front page: " WAR! OAHU BOMBED BY JAPANESE PLANES".
Complete in eight pages, never bound. The ftpg. is evenly browned, with some wear at the horizontal fold causing some "perforation" with a little bit of loss, moreso at the very middle. A few minor tears at the margins. Generally this issue is nice (see photos).
One must be very careful in buying this historic issue as 99% of those on the market, particularly on eBay, are reprints with no collector value.
Rest assured this is a genuine issue, and a cornerstone newspaper for any 20th century collection.