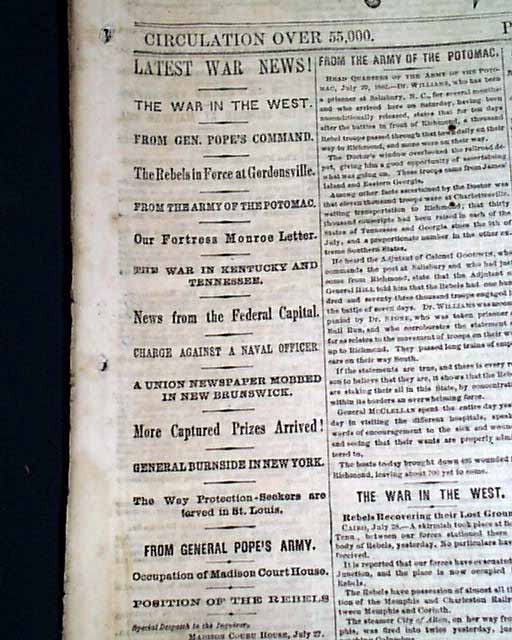 *General Pope's Command
*War in Kentucky & Tennessee
The ftpg. has many Civil War one column headlines including: "THE LATEST NEWS!", "The War In The West", "From Gen. Pope's Command", "Rebels in Force at Gordonsville", "The War in Kentucky & Tennessee",  "A Union Newspaper Mobbed in New Brunswick" (Maine),  and more (see photos). This is the tri-weekly edition of the Inquirer, meaning within its 8 pages is a second full front page dated July 31 with masthead &  headlines including: "Latest War News!", "Guerrillas In Kentucky & Missouri", "Rear Admirals Appointed", "Escape of Rebel Prisoners", and more, essentially giving you two complete front pages among the 8 pages in this issue! Never bound nor trimmed, minor margin wear and a few archival mends, generally in  very nice condition.

Fall of Richmond, the capital of the ...