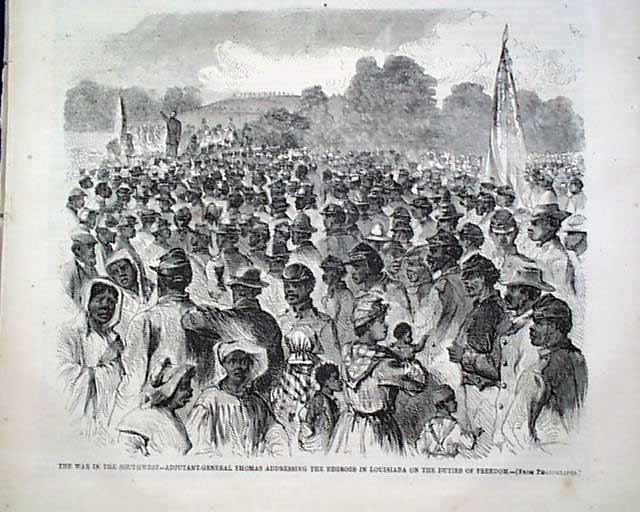 
HARPER'S WEEKLY, New York, November 14, 1863  Over half of the front page is taken up with a print: "The War In The Southwest--Adjutant-General Thomas Addressing the Negroes in Louisiana on the Duties of Freedom" showing hundreds of black soldiers, women and children.
Inside has a full page: "Lookout Mountain--Sketched by Theodore R. Davis from Our Works on Chattanooga Creek--The Rebels Shelling Our Camps"; two half page prints: "The Army of the Potomac--Buckland, Scene of a Cavalry Skirmish with Stuart" and "The French Ironclad Fleet".
The nice doublepage centerfold shows: "The 'Dunderberg', the Greatest Man-of-War in the World, as She Now Appears in William H. Webb's Ship-Yard". Half page: "A Successful Foraging Party at the West" shows a gathering of animals. Small prints of "The Late Brigadier-General Lytle, Killed at Chicamaugua" and "Rev. Henry Ward Beecher".
the back page has a cartoon: "Advantage of 'Famine Prices'.". Complete in 16 pages.