Home > Back to Search Results > Daniel Sickles Murderer In 1859....
Click image to enlarge 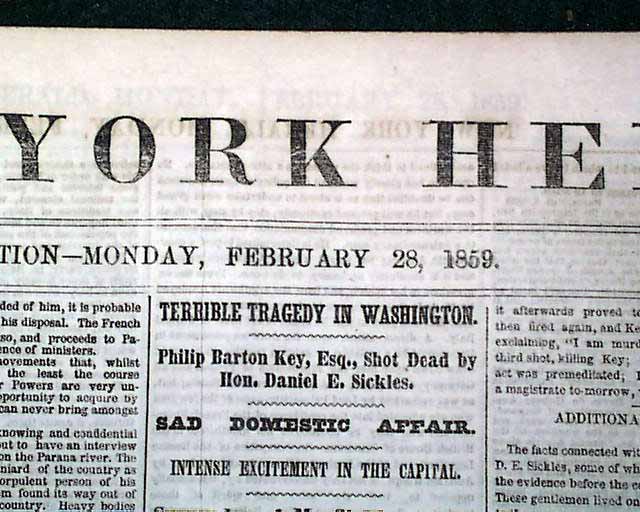 Front page has: "Terrible Tragedy In Washington" "Philip Barton Key, Esq., Shot Dead by Hon. Daniel E. Sickles" "Intense Excitement In The Capital" "Surrender of Mr. Sickles to the Authorities" "The Investigation before the Coroner Verdict Of The Jury" Other news of the day includes throughout the 8 pages in nice condition.

HISTORICAL BACKGROUND: "Sickles was born in New York City to Susan Marsh Sickles and George Garrett Sickles, a patent lawyer and politician.[1] (His year of birth is sometimes given as 1825, and, in fact, Sickles himself was known to have claimed as such. Historians speculate that Sickles deliberately chose to appear younger when he married a woman half of his age.) He learned the printer's trade and studied in the University of the City of New York (now New York University). He studied law in the office of Benjamin Butler was admitted to the bar in 1846, and was a member of the New York Assembly in 1843.[1]

In 1852, he married Teresa Bagioli against the wishes of both familieshe was 33, she only 15, although she was sophisticated for her age, speaking five languages. In 1853 he became corporation counsel of New York City, but resigned soon afterward to become secretary of the U.S. legation in London, under James Buchanan, by appointment of PresidentFranklin Pierce. He returned to America in 1855, was a member of the senate of New York state from 1856 to 1857, and, from 1857 to 1861, was a Democraticrepresentative in the United States Congress (the 35th and 36th Congresses).

Sickles's career was replete with personal scandals. He was censured by the New York State Assembly for escorting a known prostitute, Fanny White, into its chambers. He also reportedly took her to England with him, leaving his pregnant wife at home, and presented White to Queen Victoria, using as her alias the surname of a New York political opponent.[1] In 1859, in Lafayette Park, next to the White House, Sickles shot and killed Philip Barton Key, son of Francis Scott Key and U.S. Attorney for the District of Columbia, whom Sickles had discovered was having a blatantly public affair with his young wife, Teresa.[2] He was tried on a charge of murder, but was acquitted after a sensational trial involving the first use of the insanity defense in U.S. history. (His defense attorney was Edwin M. Stanton, later to become Secretary of War.) Sickles withdrew briefly from public life due to the notoriety of the trial. Oddly, the public seemed more outraged by Sickles's reconciliation with his wife after the trial than by the murder and his unorthodox acquittal" source: wikipedia