Home > Work at the Constitutional Convention leaks out...
Click image to enlarge 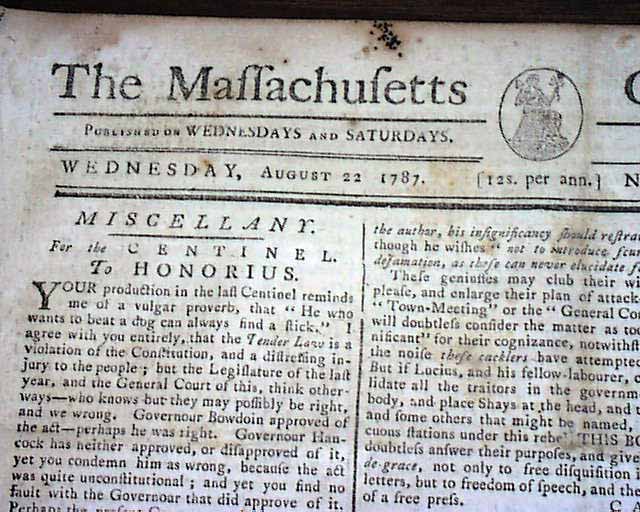 Work at the Constitutional Convention leaks out...


THE MASSACHUSETTS CENTINEL, Boston, Aug. 22, 1787 Pg. 3 has a report which tells some of what is going on in secret at the Constitutional Convention, including: "...I only advised you of the nature of the business at the opening of the Convention; but many matters have been proposed & debated on since--and although secrecy was agreed on, it is credited by some of the first informed men in this city that amongst the matters now under consideration are..." which is followed by a number of the items being discussed, ending with: "...Congress to be called the General Assembly of the United States and to sit six months in the year. No doubt much more is talked of...I hand them you; & shall, whenever I have good grounds to go on, keep informing you of what I learn."  Such reports on the workings of Congress the summer of 1787 are quite rare. Mend to a margin on the back leaf, some scattered foxing, generally quite nice.