Home > Back to Search Results > The Yellowstone expection... Is President Monroe dead?
Click image to enlarge 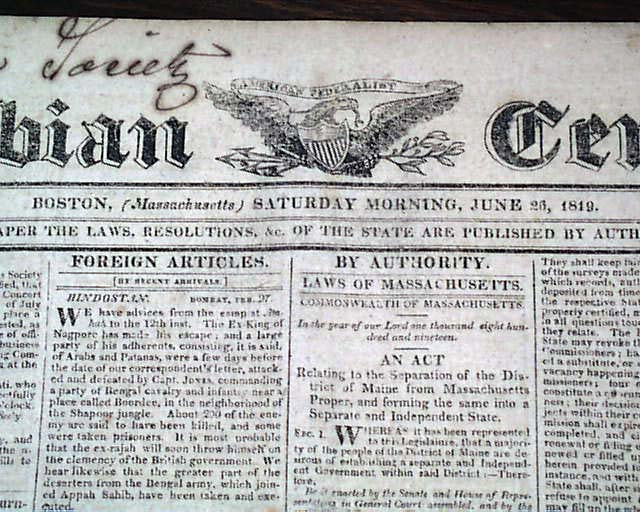 
COLUMBIAN CENTINEL, Boston, June 26, 1819  Page 2 has: "Yellowstone Expedition" which has two letters from Col. Johnson, the first from "off Cape Girardeau" and nearly "50 miles against the current of the Mississippi" with mention of difficult perils encountered on the river, and a second letter reporting that he was at St. Louis with 200 tons of provisions but that the 6th Regiment was "...yet in our rear... the rifle regiment is ready and is divided between the Belle Fountain and Martins Cantamount...". Some talk about the level of the river and his optimism about the journey (see).
The top of pg. 2 has: "President Monroe" which reports a rumor that he had died, but then notes it was incorrect (see).
Half of the ftpg. has "AN ACT" of Mass concerning: "...the separation of the district of Maine from Massachusetts proper & forming the same into a separate & independent state."
Four pages, good condition.