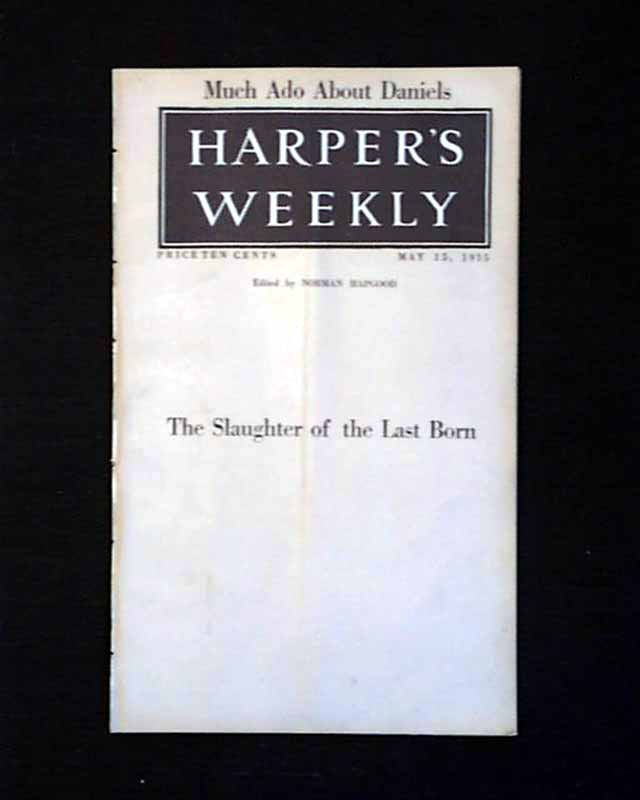 This issue has a color cover page before the title page. On the back of the cover page there are photos from the war in purple-gray ink.

In this issue, there are several articles including "In a Submarine" by Oliver Madox Hueffer; "Much Ado About Daniels"  by John Palmer Gavit; "Stage Drift" by Karl Schmidt; "The Slaughter of the Last Born" by Mary Alden Hopkins; "Political Straws" by McGregor; "A Card From the River of Doubt" by Isaac  Russell; "On Coast Fairways and Greens" by Herbert Reed and "The Shkypetars" by George Fred Williams plus much more.

There are also several illustrations in this issue including the double page centerfold illustration which is titled "Child Labor Exploiter: 'They must never hear of that immoral birth control'" by Chamberlain and "Pen and Inklings--The Passing of Wallack's" by Oliver Herford.

There is a half page ad for "Mogul Egyptain Cigarettes." Other advertisements of the day are included as well, helping to portray life at the turn of the century. This issue is in very good condition.