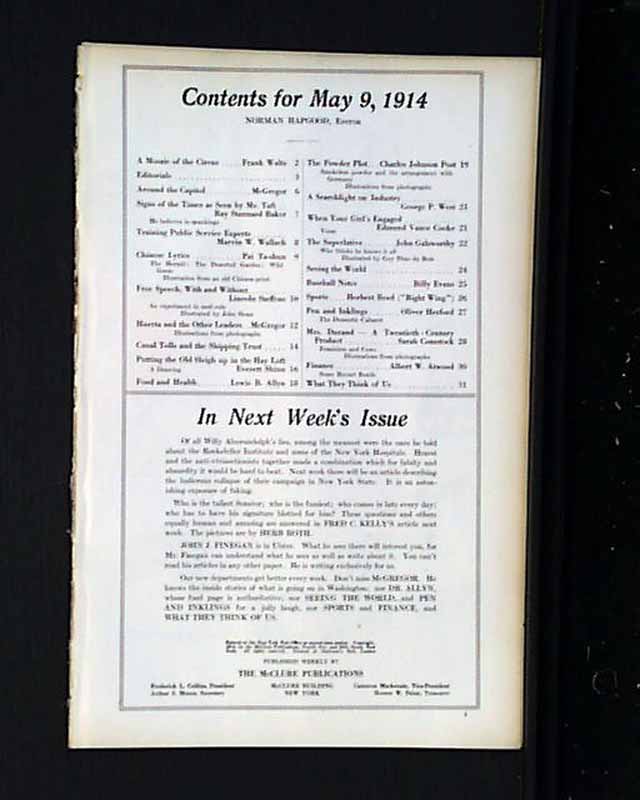 
HARPER'S WEEKLY, New York City, May 9, 1914  In this issue there are several illustrations including "A Mosaic of the Circus" by Frank Walts; "Chinese Lyrics" by Pai Ta-Shun; the double page centerfold illustration which is titled "Putting the Old Sleigh Up in the Hay Loft" by Everett Shinn and "Pen and Inklings--The Domestic Cabaret" by Oliver Herford.
There are also several articles in this issue including "Signs of the Times as Seen by Mr. Taft" by Ray Stannard Baker; "Training Public Service Experts" by Marvin W. Wallach; "Free Speech, With and Without" by Lincoln Steffens; "Huerta and the Other Leaders" by McGregor; "The Powder Plot" by Charles Johnson Post; "Baseball Notes" by Billy Evans and "Sports" by Herbert Reed plus much more.
Other advertisements of the day are included as well, helping to portray life at the turn of the century. This issue is in very good condition.