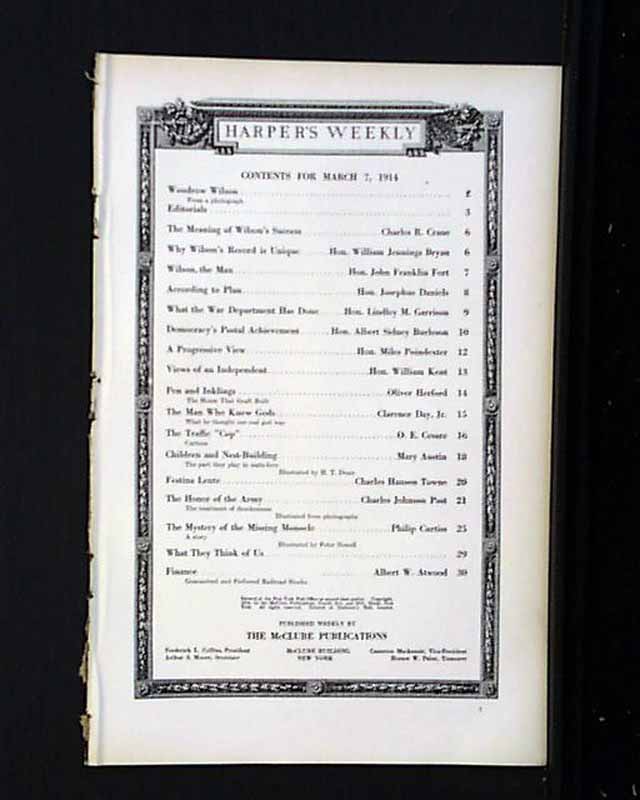 In this issue there is a photo of "Woodrow Wilson." A part of this issue is titled "One Year of Wilson" which then has several subtitles such as "The Meaning of Wilson's Success" by Charles R. Crane; "Why Wilson's Record is Unique" by Hon. William Jennings Bryan; "Wilson, the Man" by Hon. John Franklin Fort and "According to Plan" by Hon. Josephus Daniels. There are also several other articles in this issue including "What the War Department Has Done" by Hon. Lindley M. Garrison; "Democracy's Postal Achievement" by Hon. Albert Sidney Burleson; "The Man Who Knew Gods" by Clarence Day Jr.; "Festina Lente" by Charles Hanson Towne and "The Honor of the Army" by Charles Johnson Post.

There are also several illustrations in this issue including "Pen and Inklings" by Oliver Herford; the double page illustration titled "The Traffic 'Cop'" by O. E. Cesare plus much more.