Home > Back to Search Results > On Valentine's Day and more...
Click image to enlarge 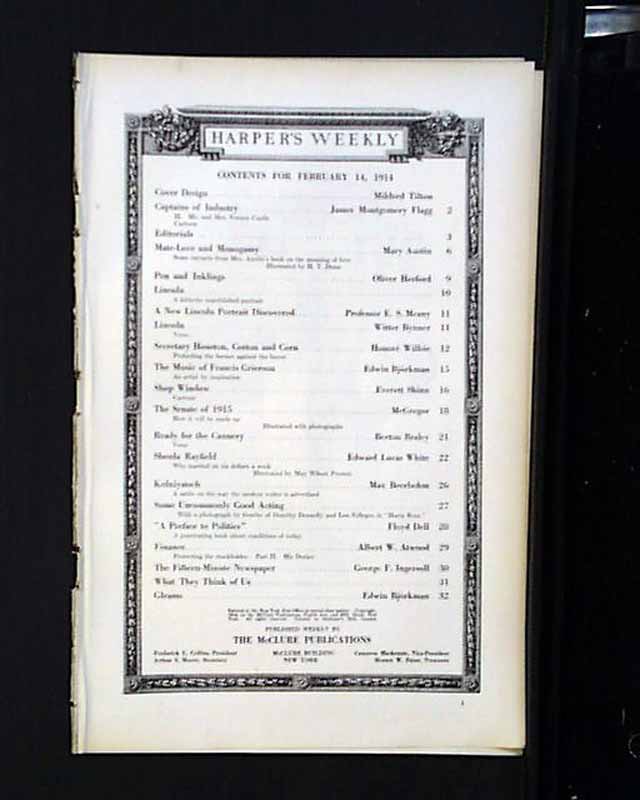 On Valentine's Day and more...


HARPER'S WEEKLY, New York, February 14, 1914. In this issue there is an illustration titled "Captains of Industry--II. Mr. and Mrs. Vernon Castle" by James Montgomery Flagg. There are several articles in this issue including "Mate-Love and Monogamy" by Mary Austin; "A New Lincoln Portrait Discovered" by E. S. Meany; "Secretary Houston, Cotton and Corn" by Honore Willsie; "The Music of Francis Grierson" by Edwin Bjorkman; "The Senate of 1915" by McGregor; "Kolniyatsch" by Max Beerbohm; "Some Uncommonly Good Acting" plus much more.
There are also several illustrations in this issue including "Pen and Inklings--A Valentine" by Oliver Herford; a portrait of Lincoln which goes with the article mentioned above "A New Lincoln Portrait Discovered" plus the double page illustration which is titled "Shop Window" by Everett Shinn.
Other advertisements of the day are included as well, helping to portray life at the turn of the century. This issue is in very good condition.