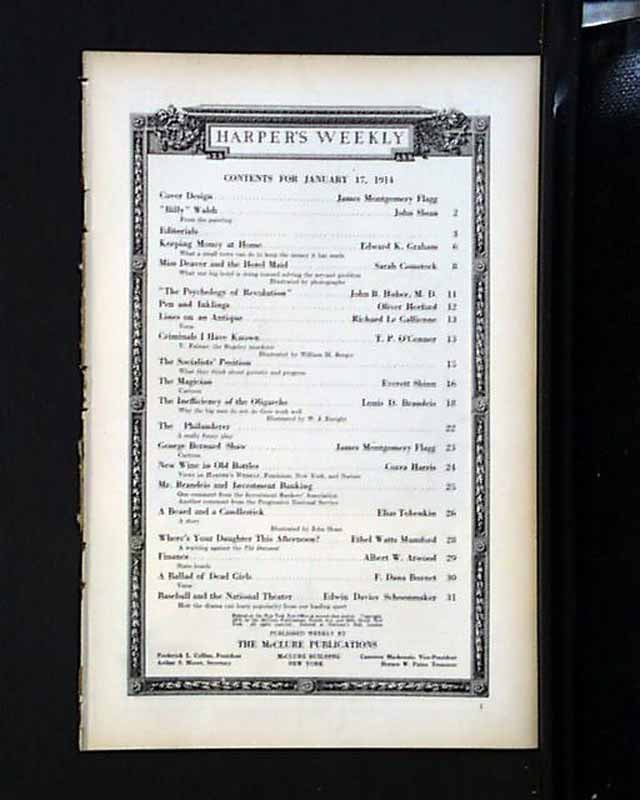 
HARPER'S WEEKLY, New York City, January 17, 1914  In this issue there is an illustration titled "'Billy' Walsh" by John Sloan. There are many articles in this issue including "Keeping Money at Home" by Edward K. Graham; "Miss Deaver and the Hotel Maid" by Sarah Comstock which includes several photos; "'The Psychology of Revolution;" by John B. Huber, M. D.; "The Socialists' Position"; "The Inefficiency of the Oligarchs" by Louis D. Brandeis; "New Wine in Old Bottles" by Corra Harris; "Mr. Brandeis and Investment Banking"; "Where is Your Daughter This Afternoon?" by Ethel Watts Mumford plus "Baseball and the Theater" by Edwin Davies Schoonmaker.
There are also several illustrations in this issue including "Pen and Inklings" by Oliver Herford; the double page illustration which is titled "The Magician" by Everett Shinn; "'It is pleasant that America appreciates George Bernard Shaw'" by James Montgomery Flagg plus much more.
Other advertisements of the day are included as well, helping to portray life at the turn of the century. This issue is in very good condition.