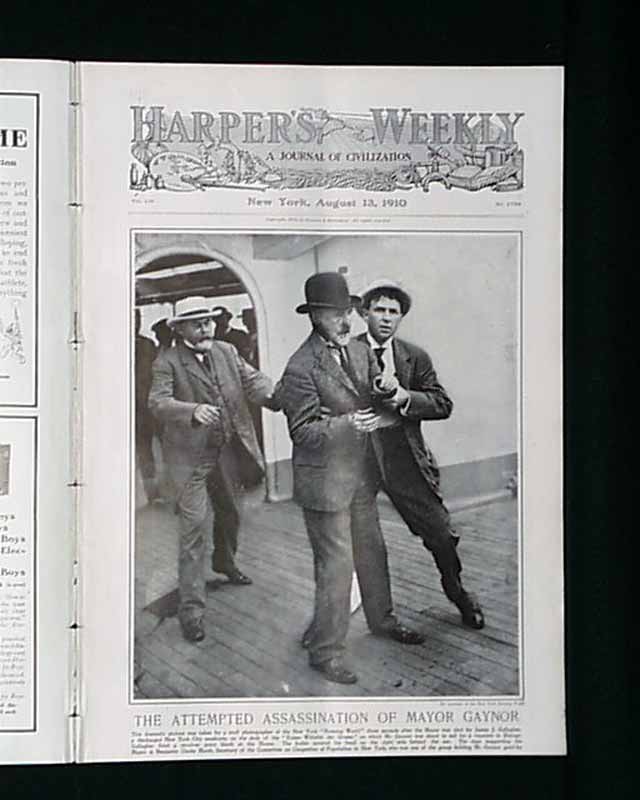 HARPER'S WEEKLY, New York City, August 13, 1910  This issue includes two front pages, something that is very unusual. The second front page was probably added after the newspapers were printed for the week when Mayor Gaynor was shot. The first front page of this issue is a photo of "Getting on at Panama" and the second one is of "The Attempted Assassination of Mayor Gaynor." The back side of this front page has a photo of "Mayor Gaynor's Assailant Being Taken from the Scene of the Shooting." Note: As is common, this issue does not contain the color outer wrapper.
This issue has an illustration of "'Dollars to Doughnuts that's Oyster Bay. Wonder if I'll be Allowed to Land? I'd like to get a Few Words of Comfort from the Doctor.' "by Kemble. The double page illustration is of "The Wise Virgin Husbands Her Oil" by F. D. Johnson, and there are photos of "The Joys of Saturday-Sunday Land." Also in this issue is an added article and photos, connected to the second front page, which are of "The Shooting of Mayor Gaynor" plus there is a full page ad of Mark Twain's books at half price and much more.
Other advertisements of the day are included as well, helping to portray life at the turn of the century.