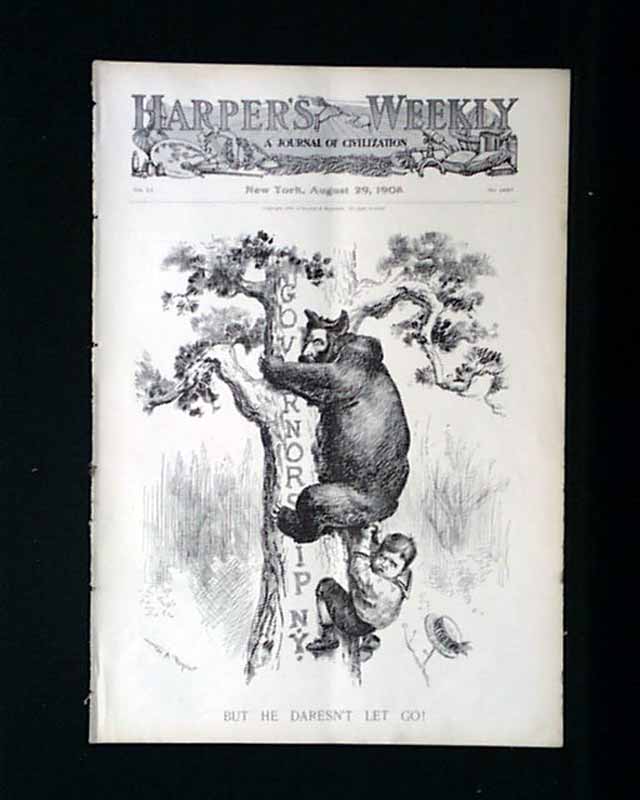 
HARPER'S WEEKLY, New York, August 29, 1908  The front page of this issue has an illustration by W. A. Rogers called "But He Daresn't Let Go!"
This issue has photos of "Mob Rule in Lincoln's Town"; "The Republicans Inform Mr. Sherman"; "Mr. Bryan Accepts"; "The End of the Great Zeppelin Air-ship"; "The Future King of England as a Stoker"; "Rowing for the Amateur Championship"; "Mr. Taft in a New Role"; "A Transfer of Famous Bones" and "The Sultan Becomes Mortal."
There is a double page illustration by Kemble called "Trying on the New Method of Speech-Making" plus the fourth comic in Grill's "The White House Boys, Bill and Jack." There is also an illustration by A. Machefert, "Holding Up the Mails" and an illustration by Griswold Tyng called "The Heiress" and much more.
Other advertisements of the day are included as well, helping to portray life at the turn of the century.