Home > Back to Search Results > Olympics in London....
Click image to enlarge 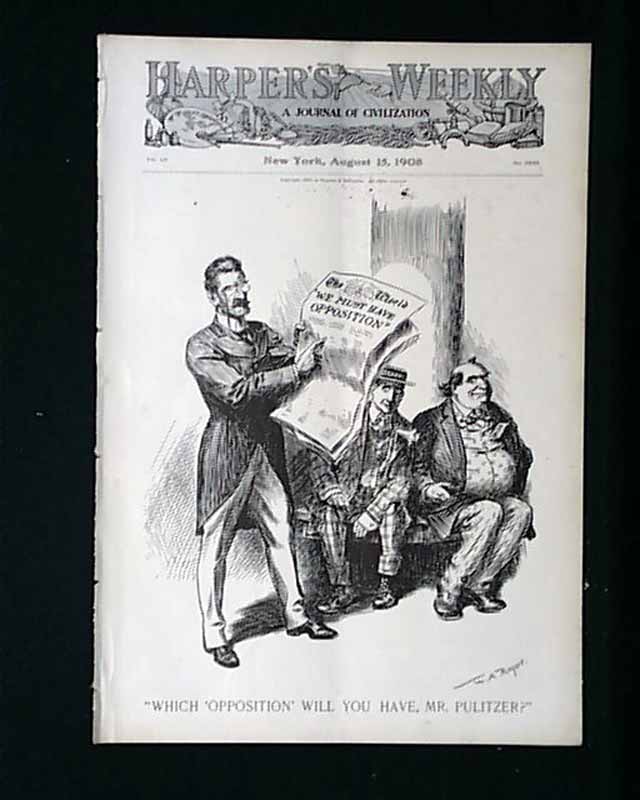 HARPER'S WEEKLY, New York, August 15, 1908  The front page of this issue has an illustration by W. A. Rogers called "'Which 'Opposition' Will You Have, Mr. Pulitzer?' "
This issue has photos of "Awarding the Olympic Prizes" which includes and photo of "Queen Alexandra presenting the Marathon Trophy to Hayes, the American Winner." There are also photos of "A New Dirigible Balloon for the Army" and there is a illustration of "A Look into the Future" by Harry Grant Dart. A full page of photos of "America Wins Again" is also in this issue along with photos of "Two Future Rulers" (Crown-Prince Wilhelm and Princess Cecila); "How Paris Uses Tug-boats in Tunnelling the Seine"; "From a Jungle to a New York Museum"; and "The Tireless Apostles of Peace." There is a double page illustration of " 'Nothing Doing, or the Sleuths on Guard': By the Two Good Bills" by Kemble plus the second comic in Grill's "The White House Boys, Bill and Jack."
Other advertisements of the day are included as well, helping to portray life at the turn of the century.