Home > Back to Search Results > President Roosevelt on the "Mayflower"...
Click image to enlarge 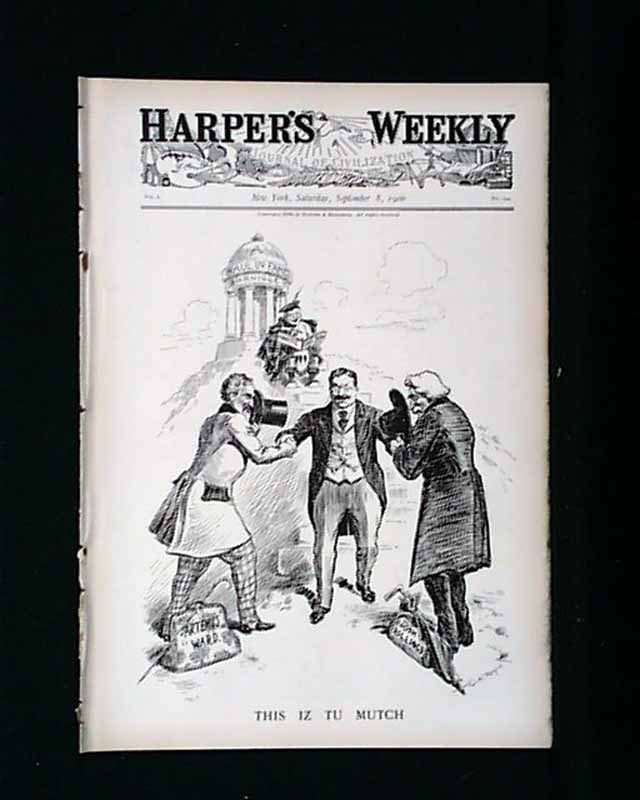 President Roosevelt on the "Mayflower"...


HARPER'S WEEKLY, New York, September 8, 1906  There is a front page, illustration, "This Iz Tu Mutch" by W. A . Rogers. "English as She is Spelt, The 300 Words Selected for Change" is an article and list of words such as "licence to license and encyclopaedia to encyclopedia." There is both an article, "The Future in America" by H. G. Wells, author of War of the Worlds, and an illustration by E. V. Nadherny in this issue. There are many photos in this issue including a double page photo of "Secretary Root Entertained at Rio De Janeiro By the Brazilian Minister of Finance at a Tea of Seventeen Courses"; "President Roosevelt ascending the ladder of the "Mayflower," from the bridge of which he reviewed the great fleet as passed slowly between the lines of ships" and other photos of the President on the "Mayflower" and other advertisements of the day are included as well. See photos for full details.