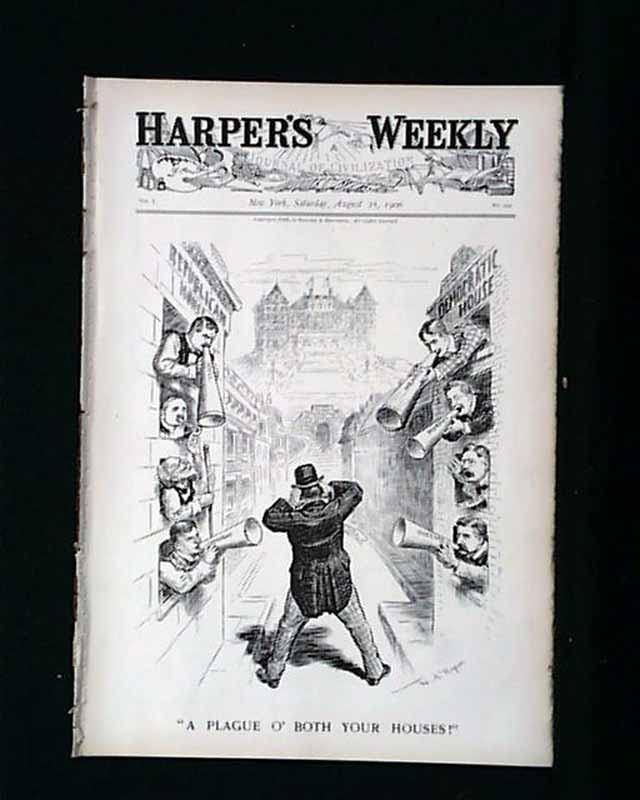 
HARPER'S WEEKLY, NewYork, August 25, 1906 There is a front page illustration, "A Plague O' Both Your Houses!" by W. A. Rogers. "The War Peril on the Mexican Border" is an article by Broughton Brandenburg. There is both an article, "The Future in America" by H. G. Wells, author of War of the Worlds, and illustrations by Vernon Howe Bailey and E. V. Nanherdy in this issue. This are many photos in this issue including "The Warfare on the Route to Coney Island"; "A Contest for Right of Way--The Offending Coudert Bridge at Oyster Bay"; and an article and photos by Major Joseph W. Wham, U.S.A. called "The Other Side of Lincoln. There is also "The Attempt of New York's East-Side Dwellers to Withstand the Recent Tropical Heat Wave, Which Held the City in its Grip During the Early Part of August"; "Saratoga's Eventful Season"; "The Automobile in War Manoeuvres" and other advertisements of the day are included as well. See photos for full details.