Home > Back to Search Results > Frederic Remington illustration... Much on the Philippines...
Click image to enlarge 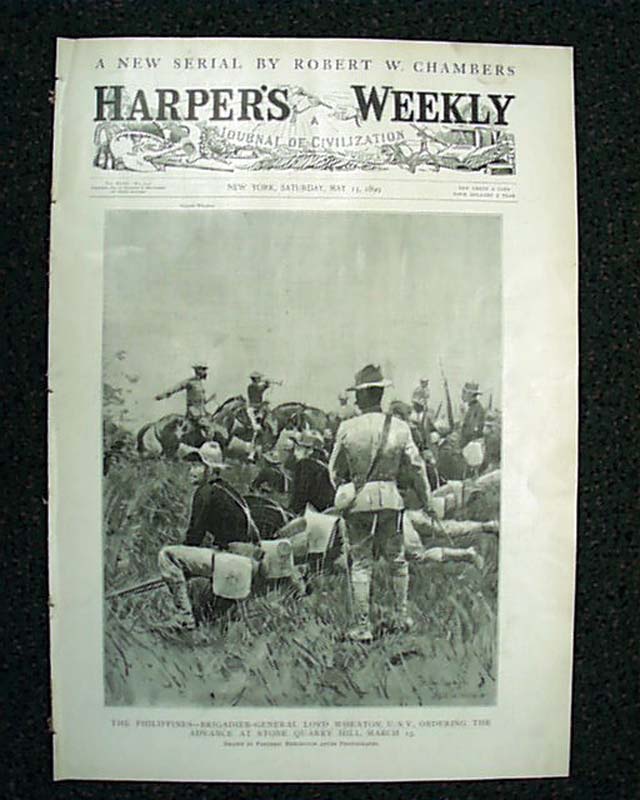 Frederic Remington illustration... Much on the Philippines...


HARPER'S WEEKLY, New York, May 13, 1899  Full front page illus. of "The Philippines - Brigadier-General Loyd Wheaton, U.S.V., Ordering the Advance at Stone Quarry Hill, March 13" by Frederic Remington.
Inside has two full pg. illus. pertaining to "The Philippines - Our Artist with the firing Line During the Advance on Malolos." 1/3 pg. illus. of "Effect of the Disastrous Tornado which Struck Kirksville, Missouri, April 27, with Great Loss of Life." 1/3 pg. illus. of "Washington - Hon. John Hay, Secretary of State, Handing to M. Jules Cambon, the French Ambassador, the $20,000,000 Due to Spain Under the Treaty of Peace , in Four Warrants for $5,000,000 Each, at the State Department, May 1, 1899." 1/4 pg. portrait of "Henry Baldwin Hyde."
Doublepage centerfold of "With the Insurgents in the Philippines - A Company of Igorrote Spearmen Drillin in Caloocan." Full pg. of illus. of "Puerto Rican - Scenes in the Island's Principal Towns."
Other news and advertisements of the day are included. This issue is complete and is in good condition.