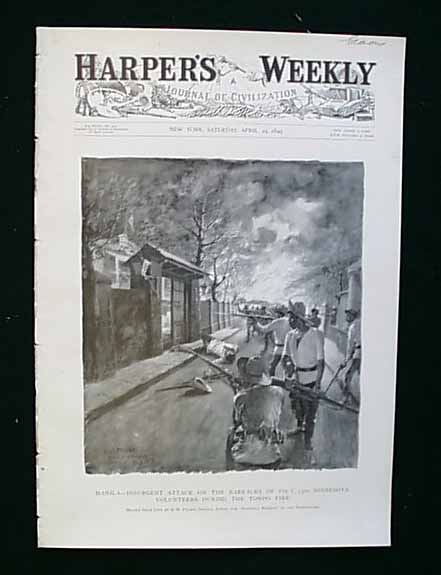 
HARPER'S WEEKLY, New York, April 29, 1899  Full front page illus. of "Manila - Insurgent Attack on the Barracks of Co. C, 13th Minnesota Volunteers, During the Tondo Fire." Inside are three small portraits of "The Tripartite Joint Commission for the Settlement of the Samoan Trouble." Full pg. illus. of "Kansas City's Mammoth New Convention Hall." Full pg. illus. of "The Arrival In New York of the U.S.S. 'Raleigh' - The First Vessel of Admiral Dewey's Victorious Fleet to Return to the United States."
Doublepage centerfold of "Havana - The American Officers in Chargge int he Capital, and Their Official Residences." Full pg. illus. of "Havana - General Gomez, His Life, and His Antagonists." Also contains a full page color Ivory Snow advertisement.
Other news and advertisements of the day are included. This issue is complete and is in good condition.