Home > Back to Search Results > The new Congressional Library at Washington, D.C...
Click image to enlarge 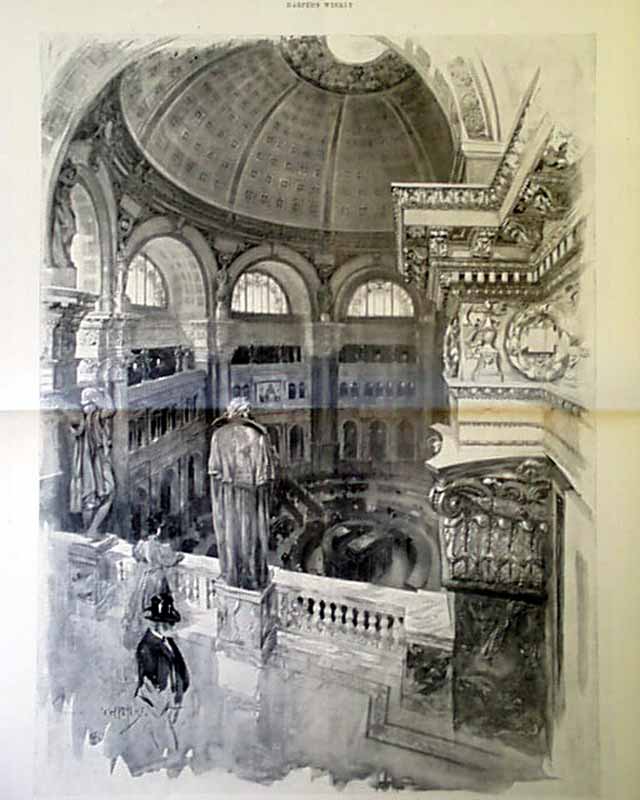 
HARPER'S WEEKLY, New York, March 27, 1897  Full front page illus. of "Dead Man's Curve - New York's Most Dangerous Crossings." Inside are two 1/4 pg. portraits of "Colonel John Hay" and "General Horace Porter." Four small portraits of "New United States Senators." Three small portraits of "The German Opera Season in New York." 1/2 pg. "Map of Greece, Showing Its Geographical Relation to Crete and Turkey." 2/3 pg. illus. of "The Entrance Hall of the New Congressional Library, Washington, D.C."
Doublepage centerfold of Under the Dome of the New Congressional Library, Washington, D.C. - View from the Upper Gallery, Showing the Rotunda." 1/2 pg. illus. of "The Parliamentary Inquiry on the Jameson Raid - Cecil Rhodes giving Evidence Before the South Africa Committee." Full pg. of ilus. of "Farthest North." 2/3 pg. illus. of "Scenes at the Autumnal Meeting of the Royal and Ancient Golf Club of St. Andrews, Scotland."  A serialized story entitled "The Pursuit of the House-Boat. Being Some Further Account of the Doings of the Associated Shades Under the Leadership of Sherlock Holmes, Esq." by A. Conan Doyle.
Other news and advertisements of the day are included. This issue is complete in 24 pages.