Home > Back to Search Results > A.B. Frost on hunting...
Click image to enlarge 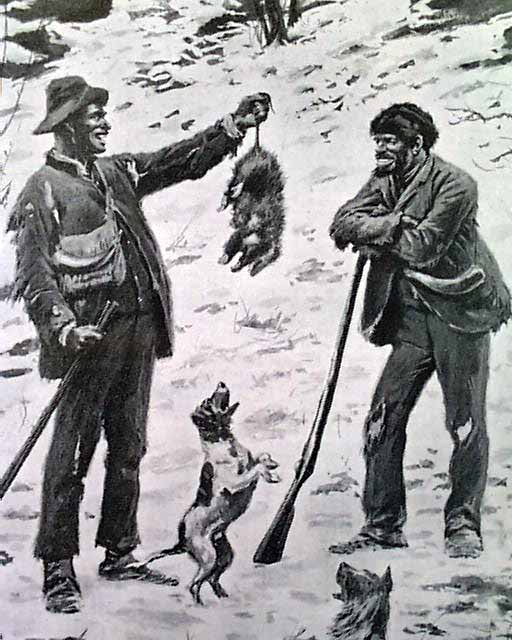 
HARPER'S WEEKLY,  New York, February 18, 1893 The front cover of the issue features a great full page illustration of 'Tobogganing At Montmorency Falls, Canada'. Inside the issue is a half page photo of "The Trial Trip of the United States Steamship 'Monterey' in San Francisco Bay'. A full page features coverage of Howell E Jackson which includes a 1/4 page photo and "The Hawaiian Question" which includes illustrations of several persons involved including the five commissioners. A full page by A.B. Frost: 'A Prize' shows two Blacks, hunting.
The doublepage centerfold centerfold is 'Junior Promenade At Yale - The Dance in the Armory'. A nice full page shows 7 scenes of 'The Racquet Club, New York'. "The Racquet and Tennis Club of New York" article also has several accompanying photos and illustrations as well. Fullpg. of 12 photos: 'How Tammany Hall Neglects The Streets' A 1/3 page illustration "A Whaleback Passenger-Boat" features an accompanying article indicating this would be named S.S. Christopher Columbus and used at the World's Fair. An article "Mr. A. Conan Doyle", writer of Sherlock Holmes, also features a 1/4 page illustration of him.
Complete issue.