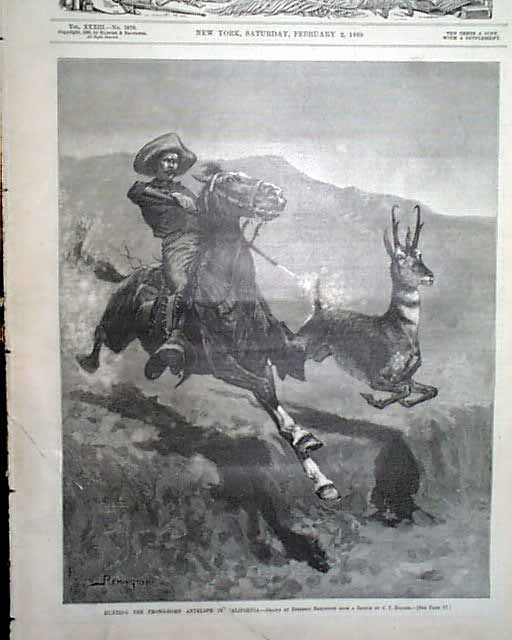 
HARPER'S WEEKLY, New York, Feb. 2, 1889 The full front page is an illustration by Remington of "Hunting the Prong Horn Antelope in California." Inside is a 1/4 pg. portrait of "Hon. W. D. Washburn, the Newly Elected United States Senator from Minnesota"; a half page of "Destruction of a Derelict by a United States Naval Cruiser." The doublepage centerfold is: "In the Land of Promise-A Scene in Castle Garden."
Also in this issue is a one-quarter page map: "The Seat of the Troubles in Samoa, Showing the Distribution of the Land Among the Various Nationalities, as Stated by the German Consul." A full page illus. has five illus. pertaining to "Samoa and Its Rival Kings" including portraits of "King Tamasese, Supported by the Germans" and "King Malietoa, Deposed by the Germans." Full pg. illus. by Frederic Remington of "Mounted Policemen Arresting Burglars Uptown in New York."; a one-third page illus. containing the following people: "Bardwell Slote, Rip Van Winkel, Davy Crockett, and Josh Whitcomb." Two 1/4 pg. portraits of "Augustin Daly" and "Edward Harrigan." Small portrait of "Bronson Howard."
Complete in twenty pages.