Home > Back to Search Results > Buffalo Soldier... "Saddle Up!" Frederic Remington on the front page... Polo at Newport...
Click image to enlarge 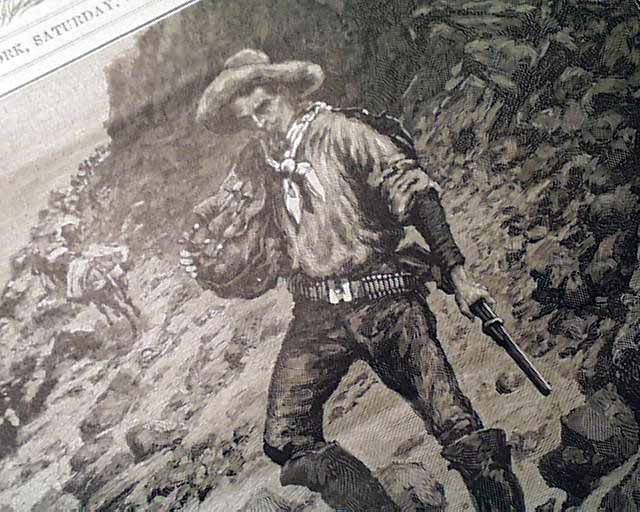 Buffalo Soldier... "Saddle Up!" Frederic Remington on the front page... Polo at Newport...


HARPER'S WEEKLY, New York, September 4, 1886  The full front page is a very nice (and famous) Frederic Remington print: "Abandoned" which has a Western theme. There is a related article on an inside page: "Our Soldiers In the Southwest" which also has a Remington print titled: "Saddle Up", which includes two buffalo soldiers (black soldiers). Also within the issue is a nice full page political cartoon by Thomas Nast: "Liberty Is Not Anarchy", a halfpg: "Smuggling On the Rio Grande". There is also a very nice & dramatic doublepg. centerfold: "The International Polo Tournament at Newport", and a fullpg: "The Trial Yacht Races"; halfpg: "International Canoe Race at Grindstone Island".
Other news and advertisements of the day are included. Complete in 16 pages.