Home > Back to Search Results > The North Pole...
Click image to enlarge 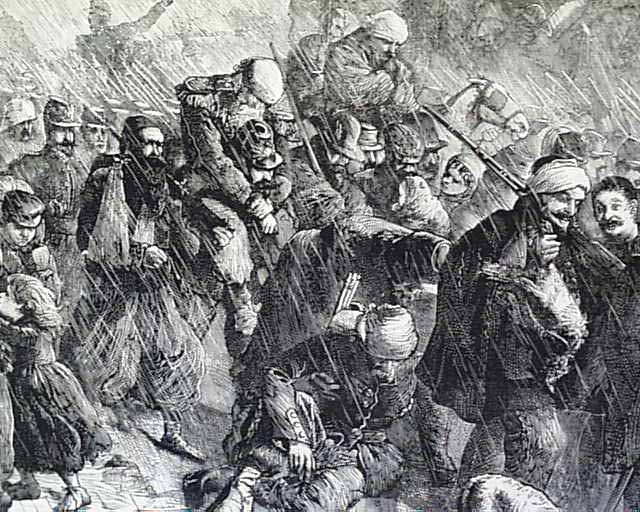 
HARPER'S WEEKLY Feb. 4, 1871 Front 2/3 pg. illus. of "Scene in a Station House on a Winter's Night." Inside are five large illus. pertaining to "Scenes in San Domingo, with a Map of the Island" including a portrait of "President Buenaventura Baez," and illus. such as "San Domingo City-Scene in one of the Principal Streets," "The Harbor and Fortifications of San Domingo City," "The Citadel Signal Tower," and a "Map of the Island of "San Domingo." There is also a 1/2 pg. illus. of "The German Army Crossing thd Loire at Orleans" and "Retreat of the French Army Across the Loire."
Doublepage centerfold of "The Last Bivouac: The crest of a Hill Between Chamnpigny and Villiers, on the Night of December 5, 1870." Four small portraits of "The Irish Exiles" including "Jeremiah O'Donovan Rossa, John O'leary, Thomas Clarke Luby, and General Halpin." A 1/2 pg. illus. of "The City of Rouen." Two 1/2 pg. illus. of "French Soldiers Cutting Up Horses after a Sortie" and "Captured Gun Boats at Orleans." 1/2 pg. illus. of "A Knotty Problem-Starve or Stangle." (Rabbit, Bunny). A 1/2 pg. illus. of "Duck Shooting in Winter." Ten illus. pertaining to "Nights Near the North Pole." (Greenland, Walruses, Glacier, Aurora, Meteor, Parhelia or Mock Sun, and Field Bay." Back pg. illus. of "A Winter Scene in the Country-Just Before Sunset." (Turkeys in a tree).