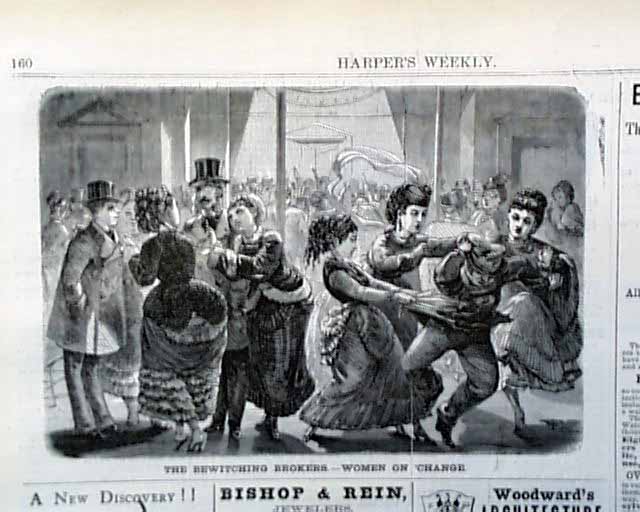 
HARPER'S WEEKLY, New York, March 5, 1870  The most intriguing item is the back page cartoon captioned: "The Bewitching Brokers - Women on Change".
The brokers were Victoria Woodhull & her sister Tennessee (Tennie) Claflin, who were the first women to open a brokerage firm on the previously male-dominated Wall Street. The press was not kind to their new enterprise, however they proved to be very successful.
Both Woodhull and Claflin were notable woman's rights/suffrage leaders. Victoria was the first woman to run for President.
The front cover features and article and illustration on "The Late Joseph Wesley Harper". One page features a one-third page Indian scene entitled "Boundary Post Between the U.S. and Rupert's Land" and a two-third illustration "The Carthusian Convent at Rome". A very displayable full page illustration of a young Black boy entitled "A Brown Study". A full page of  two scenes of "The Sewers of Paris". A full-page engraving entitled "Breach of Promise - How to Repair Broken Hearts" which is comprise of a vignette of several scenes and a three-quarter page entitled "Japanese Ladies".
Complete in 16 pages and contains prints and related text.