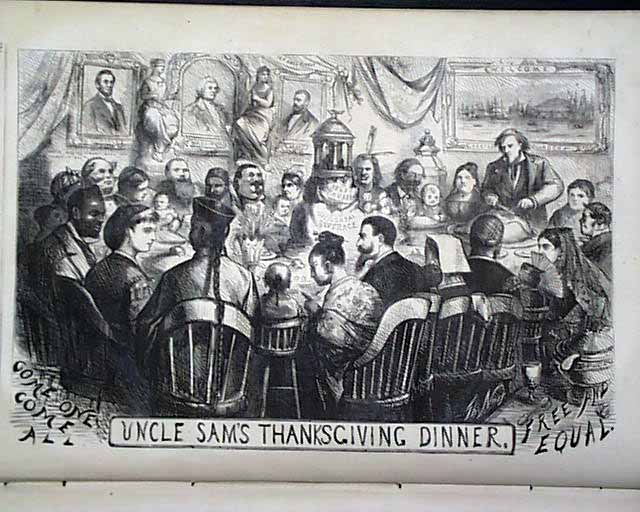 
HARPER'S WEEKLY, New York, November 20, 1869 Of particular note is the sought after full page illustration of "Uncle Sam's Thanksgiving Dinner," which, according to the Thomas Nast Society, is the very first Nast print of Uncle Sam in this publication. Thomas Nast is considered the artist who did much to create the present-day version of Uncle Sam. Also present is a full page containing many smaller illustrations pertaining to "Thanksgiving, 1869," in which it contains a message from President U. S. Grant.
Another noteworthy print is found on the front of this issue - a half-page illustration of "A Political Discussion" (negro/freedmen in the streets of Richmond).
Inside is a quarter page illustration of "M. Ferdinand De Lesseps, Chief Promoter of the Suez Canal" along with a 1/6 page "Map of the Suez Canal" and half page illustration of "The Isthmus of Suez Maritime Canal, Near Kantara." A quarter page illustration is of "Wilkie Collins", containing his signature, as this is associated to a new literary series in this issue "Man and Wife". Five small illustration pertaining to "Old Tombs in Bunhill Fields" including "Daniel Defoe's Tomb," "Mrs. Susannah Wesley's Tomb," "Bust of Leigh Hunt on the Monument in Kensalgreen Cemetery," "Dr. Isaac Watt's Tomb," and "John Bunyan's Tomb." Also, three quarter page illustrations of "The Late George Peabody," "Henry Cooper, United States Senator from Tennessee," and "Ex-Governor Frederick F. Low, United States Minister to China."
Complete in 16 pages and contains additional prints and related text.