Home > Back to Search Results > American Indians... The beach at Long Branch...
Click image to enlarge 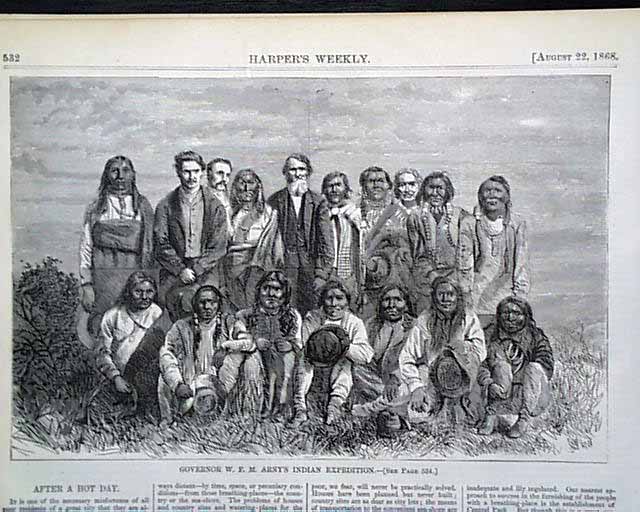 
HARPER'S WEEKLY, New York, August 22, 1868  The front page of the issue features a nearly half page illustration "Rogers, the Sculptor, Modeling His Colossal Statue of America, at Rome, June, 1868"  Nearly half page illustration of: 'Governor W.F.M. Arny's Indian Expedition' shows him with 13 Indians. Halfpg: 'On the Docks After a Hot Day'.  An article "The Late Gen. Halpine features a small illustrations of him also. "Francis Deak, the Hungarian Leader" is a quarter page illustration which has an accompanying article.
The full page 'The Beach at Long Branch, New Jersey' is very displayable. A full page features two scenes: 'The Toilers of the Sea - Fishermen at Nauvoo Launching their Boats at Daybreak' and 'The Fishing Village of Nauvoo, New Jersey'. Nearly half page: 'Ostrich Hunting' shows a man dressed as one. A half page 'Salt Mines on Isle Petite Auce, Louisiana'. A quarter-page illustration of the "Soldiers' and Sailors Monument, Chelsea, Massachusetts". A half page illustration "Prejudice - 'What! won't these stupid White Geese even let me go to School without hissing and biting at me?'" is of a young lad being chased by a flock.
Complete in 16 pages and contains additional prints and related text.