Home > The dead at Andersonville...
Click image to enlarge 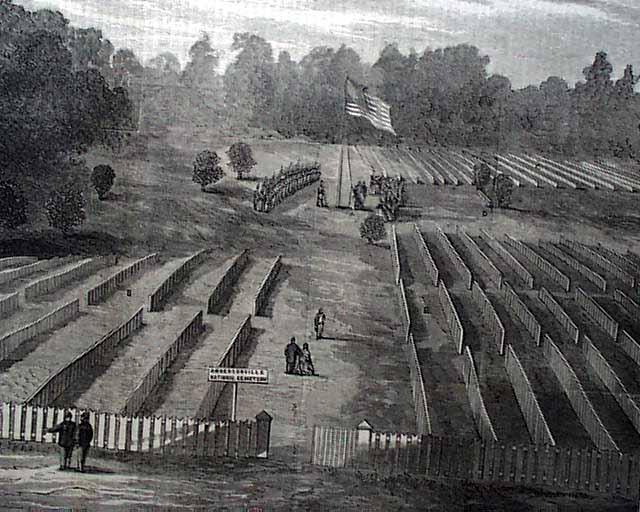 The dead at Andersonville...


HARPER'S WEEKLY, New York, October 7, 1865  The front page shows: "The Naval Festival at Portsmouth, England - Arrival of the French Fleet--The 'Solferino' Saluting the English Flag". Other prints within include: "Genberal H. W. Slocum" "General Francis C. Barlow" "The Late Thomas Wildey, P.G." "Monument Erected September 20, 1865 in Honor of Thomas Wildey, Founder of Odd Fellowship in America" "the National Horse Fair at Springfield, Illinois" 'The Late Brigadier-General Alexander Schimmelpfennig" "Tilting the Ring" "Crowning the Queen of Love and Beauty" "Procession to the Throne and Ballroom" "Dancing By Moonlight" "Analostan Island, District of Columbia" "Introduction of Knights to the Queen".
There are two full page prints: "Grounds at Andersonville, Georgia, Where Are Buried Fourteen Thousand Union Soldiers who died in Andersonville Prison" and "The 36th Annual Fair of the American Institute at the Amory of the 22nd Regiment, in 14th Street, New  York". The back page has a cartoon: "The Modern Car of Juggernaut". Complete in 16 pages.