Home > Back to Search Results > Follow-up to the Civil War... Prisoner cruelties...
Click image to enlarge 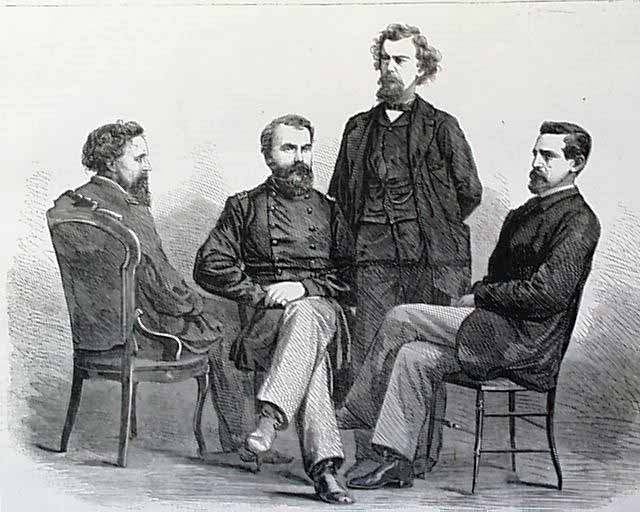 
HARPER'S WEEKLY June 17, 1865  The full front page shows: "Hon. William H. Seward, Secretary of State" with an article on him on page 2. Other articles are: "The Fate Of Davis" "The Day of Reckoning" "The Conspiracy Trial".
Inside ha a nice, large print of: "Major-General William T. Sherman", and smaller prints of: "General Weitzel's Texas Expedition--The Fleet at Hampton Roads" "The Clothes In Which Davis Disguised Himself" "Officers Engaged in the Capture of Davis", a small map of the: "Scene of Davis's capture Near Irwinsville, Ga.". A page has 7 small prints showing malnourished Yankee prisoners which accompany an article: "Rebel Cruelties", the prints showing "Smith & Churchill" "Benjamin T. Dougherty" "John H. Matthews" "Calvin Bates" and "John W. January".
Other prints include a half page: "Rebel Soldiers Taking the Oath of Allegiance in the Senate Chamber at Richmond" , "Building of the Northwestern Sanitary commission & Soldiers' Home Fair at Chicago", and a doublepage centerfold with two: "Panoramic Views of Richmond From General Henningsen's House" showing much destruction.
The back page has a political cartoon which shows Uncle Sam. Complete in 16 pages.