Home > Back to Search Results > Trial of the conspirators, with Mrs. Surratt...
Click image to enlarge 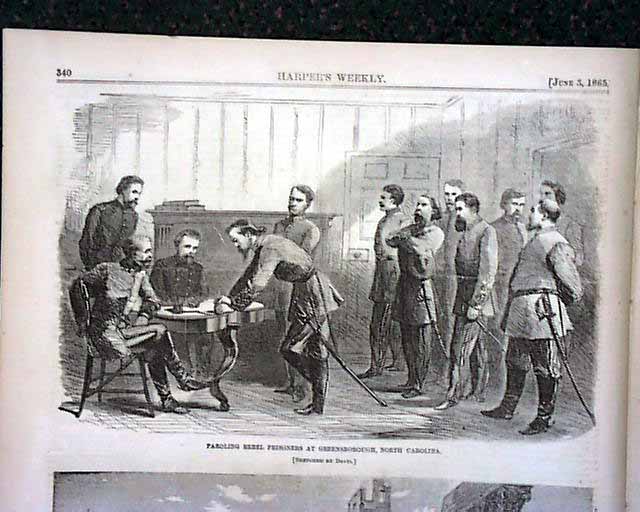 Trial of the conspirators, with Mrs. Surratt...


HARPER'S WEEKLY, New York, June 3, 1865 The front page is a cartoonish print concerning the end of the Civil War captioned: 'Check-Mate!' showing Jeff. Davis playing a game of chess with Uncle Sam, with war generals as the playing pieces.
Inside has a one-third page showing the various men involved in the: "Trial of the Conspirators--Pencil Sketches from Our Artist's Sketch-Book" including the accused save for Mrs. Surratt. Also: "Paroling Rebel Prisoners at Greensborough, North Carolina" "Richmond Ladies Going to Receive Government Rations" "Birth Place of President Andrew Johnson, Raleigh, N.C." and "Penitentiary Building at Washington in Which the Conspirators Are Confined & Undergoing Trial" . Also prints of the "National Academy of Design", and a full page: "Bird's-eye View of the Suez Canal Connecting the Red Sea with the Mediterranean".
The doublepage centerfold shows: "Court Room at the Old Penitentiary, Wash., during the Trial of the Conspirators" which includes all the principal players including the accused along the back, with Mrs. Surratt shown to the far left.
The back page has a cartoon: "Ain't You Going to Recognize me?" which shows Jefferson Davis is a woman's dress. Complete in 16 pages.