Home > Back to Search Results > Prints on the Lincoln funeral, killing of Booth...
Click image to enlarge 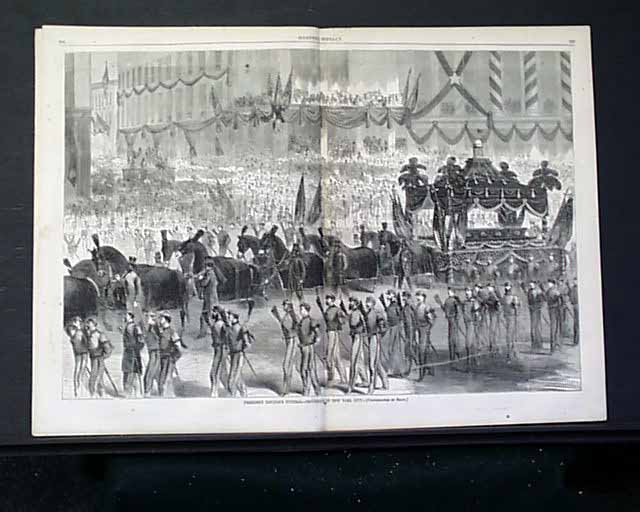 Prints on the Lincoln funeral, killing of Booth...


HARPER'S WEEKLY, New York, May 13, 1865  The front page features a large print of: "Andrew Johnson" who succeeded Abraham Lincoln as President. The balance of the front page is a lengthy biography of him.
There are several prints within which relate to the Abraham Lincoln funeral and the hunting & killing of John Wilkes Booth. Included are prints captioned: "Sergeant Boston Corbett" who shot Booth; two-thirds of a pg: "Planning The Capture of Booth & Harold"; a nice & dramatic halfpg: "Booth's Capture--The Assassin Brought To Bay" shows Booth with a rifle & crutch in a barn which is afire. Also a nearly halfpg: "Post-Mortem Examination of Booth's Body on Board the Monitor 'Montauk' ".
There is a very nice doublepage centerfold captioned: "President Lincoln's Funeral--Procession in New York City".
Another nearly halfpg: "President Lincoln's Funeral--Removal of the Body from the City Hall to the Funeral Car, New York" and a halfpg: "The Confederate Steam Ram 'Stonewall' Leaving Lisbon Harbor". Two more prints in this issue are: "The Late Richard Corden" and "The Tower of Belem Firing on the United States Frigates 'Niagara' and 'Sacramento' Lying in Lisbon Harbor."
The back page has a cartoon featuring Uncle Sam: "About the Size Of It"