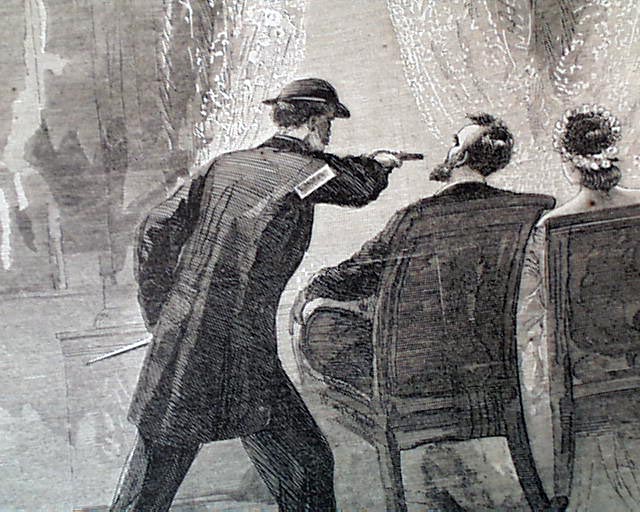 The front page has a large and dramatic illustration of "J. Wilkes Booth" plus a lengthy article headed: 'The Murder Of The President' making this a nice display issue.
Inside articles are headed: "Abraham Lincoln" "President Johnson" "Mr. Seward" "Great Pan Is Dead" and "The Folly of Crime". A small illustration captioned: "Plan of the Box Occupied by President Lincoln at Ford's Theatre, April 14, 1865" is present also.
Also inside is a full page with two prints: "The Assassination Of President Lincoln at Ford's Theatre on the Night of April 14, 1865" showing Booth shooting Lincoln in the head; and the other: "The Assassination of President Lincoln at Ford's Theatre - After the Act" showing Booth leaping to the stage in making his escape.
The very dramatic doublepage centerfold by Thomas Nast shows Liberty weeping on Lincoln's coffin.
A full page engraving by Thomas Nast shows: "The Eve of War" and "The Dawn of Peace" with a related article.
Another page features a 1/3 illustration: "The Siege of Mobile - Wreck of the 'Osage' and the Monitor 'Milwaukee'", 1/3 page illustration: "Landing of the National Forces at the Mouth of Fish River, Below Mobile, March 23, 24, and 28th, 1865"; 1/6 page illustration: "Destruction of the Tin-Clad No. 48, April 1, 1865" and 1/6 page illustration: "Mushroom Anchor Torpedoes".
Also included is a half-page: "Sherman's Army - the Third Division of the Fourteenth Corps Crossing Juniper Creek, March 9, 1865".
Sixteen pages, very minor margin wear, nice condition.