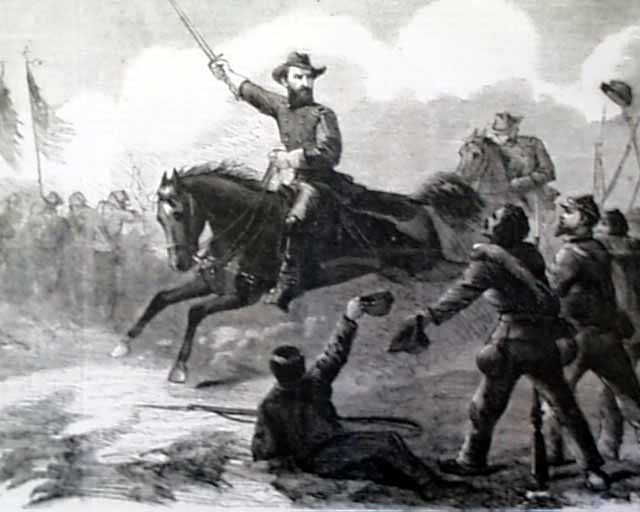 
HARPER'S WEEKLY, New York, April 22, 1865  The front page shows: "General Sheridan at the Battle of Five Forks" and also: "Cavalry Charge at the Battle of Five Forks".  Inside has some nice text on the ending of the Civil War with articles headed: "Palm Sunday" "Grant" "Robert E. Lee" "Abraham Lincoln" and "What Next?"
A full page has 3 prints captioned: "Before Petersburg--The Retreat of the Rebels Across the Appomattox..." "Gallant Action of Colonel Sniper..." and "Rebel Fort & Line of Works Near Burgess Mills...".
A nearly half page map is captioned: "The Scene of Conflict in Virginia". Two full pages have 6 prints of: "Ruins on Main Street, Richmond" "The City of Richmond...View from Gamble's Hill" "The City of Richmond...Looking Westward" "View of Libey Prison Richmond" "View of Castle Thunder, in Richmond" "Capture of Petersburg...Second Michigan Raising the Stars & Stripes Over the Custom House".
The doublepage centerfold is a large, triumphant print of: "The Union Army Entering Richmond" to the cheers of hundreds.
The back page is a sobering cartoon: "A Man Knows a Man" showing one-legged soldiers shaking hands, one a Black soldier. Complete in 16 pages.
*Note: For some (unknown) reason, even first-rate issues for this date have a bit more roughness to them - more than typical foxing, print-creases, etc.. The first-rate price has been adjusted accordingly.