Home > Back to Search Results > Petersburg and Harper's Ferry...
Click image to enlarge 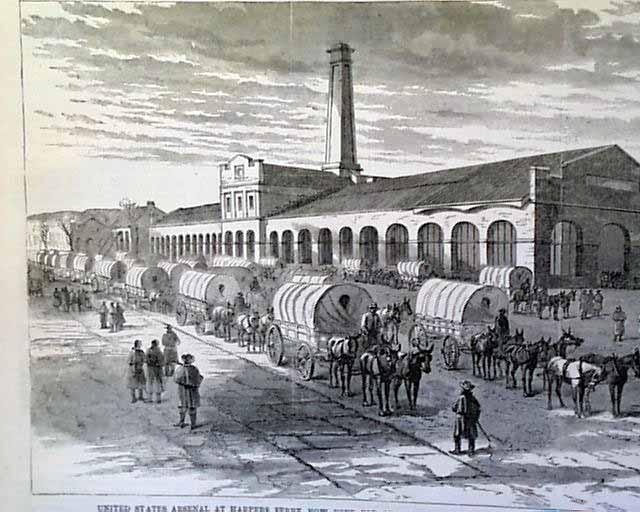 
HARPER'S WEEKLY, New York, March 11, 1865  the front page has two prints: "Before Petersburg--Issuing Rations of Whisky and Quinine" and "Admiral Porter's Boats Removing torpedoes & Buoying the Channel in Cape Fear River" with an article headed: "Capture of Wilmington".
Prints inside include: "View of Petersburg From the Signal Station on Our Extreme Left" "Exterior View of Hospital Tent & Wagon" "Interior of Hospital Tent & Wagon" "Before Petersburg--Field Hospital of the First Division, Ninth Army Corps" "Operating Room" "Interior of a Hospital Ward" "United States Arsenal at Harper's Ferry, Now Used for Quartermaster's Stores for Sheridan's Army" "View In Harper's Ferry--General Stevenson's Headquarters, Loudon Heights in the Distance" "Junction of the Potomac & Shenandoah Rivers, From the Cemetery Above Harpers Ferry" "The 'Great Eastern' in the Medway Receiving the Atlantic Telegraph Cable" "Coiling the Atlantic Telegraph Cable In One of the Tanks On Board the 'Great Eastern' ".
The back page has a cartoon: "Blessings In Disguise". Complete in 16 pages.