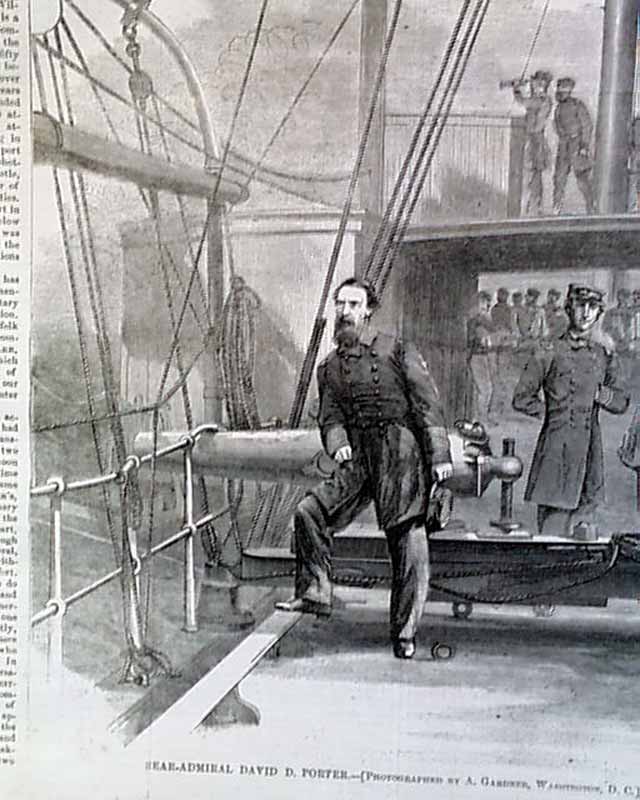 
HARPER'S WEEKLY, New York, Jan. 21, 1865  The full front page is a print: "View of General Butler's  Dutch Gap Canal Before the Explosion of the Bulkhead". Inside has a full page print: "The Union Army Entered Savannah on the 21st December and on the 24th the First Number of the 'Loyal Georgian' Was Issued."
Other prints within include: "Rear-Admiral David D. Porter" "Bursting of the 100 Pound Parrott Gun on Board the United States Steamer 'Juniata' " "Rebel Torpedo Found in the Roanoke River" "Wreck of the 'Otsego' and the Explosion of the Tug 'Bazley' In the Roanoke River" "A Commissary Train Among the Mountains" "Mr. r. C. Gridley & His Sack of Flour" "The Rebel Colonel John S. Mosby" "The 'Eliza Hancox' Rescuing the Sole Survivor of the Wreck of a Light Ship Off Charleston, S.C."
The doublepage centerfold has 7: "Views In & Around Savannah, Georgia". The back page has 2 cartoons: "The Merry Andrew of the Bergen Tunnel" and "A Caution to Young Ladies Waiting For an Omnibus". Complete in 16 pages.