Home > Back to Search Results > War events near Petersburg...
Click image to enlarge 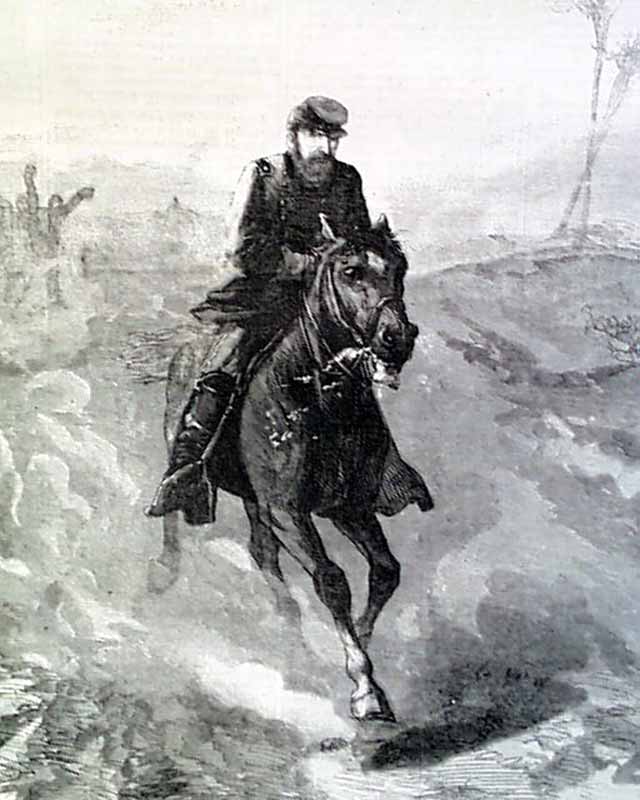 
HARPER'S WEEKLY, New York, Nov. 5, 1864  The full front page is a nice print of: "Phil Sheridan's Ride to the Front." showing him on horseback. Inside has a full page print: "Union Refugees Coming Into the Federal Lines" and half page prints: "Adams Express Office at City Point, Virginia, on Pay Day" "Valley Of the Shenandoah--Paying Sheridan's Troops at Night in Sutler's Tent" "Bomb-Proof Rifle Pit in Front of Petersburg" & "The Late Residence of the Rebel Colonel Pegram, with Federal Fort Adjacent, On General Meade's Left".
Other prints include a doublepage centerfold with two scenes: "General Butler's Canal At Dutch Gap" and "Yankee Improvements in Front of Petersburg", as well as "Signal Station Near General Meade's Headquarters" "The Late Colonel Alexander Gardiner" and "The Late Major James P. Jones"
The back page has a cartoon: "Impetuous Charge of The First Colored Rebel Regiment". Complete in 16 pages.