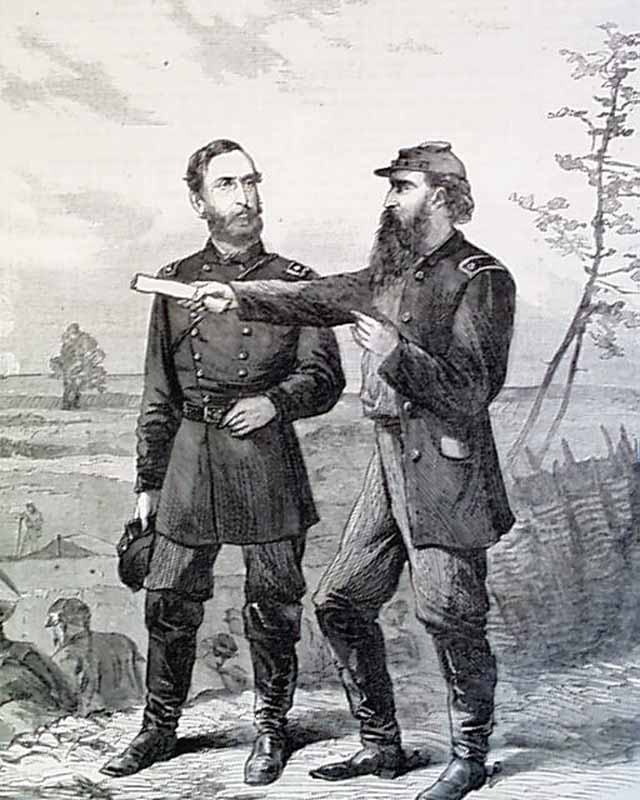 
HARPER'S WEEKLY, New York, October 15, 1864  Most of the front page is taken up with a print: "General Hunt and Major Duane, Chief of Artillery & Chief engineer of the Army of the Potomac" with a related article. Other prints within include: "The Sixth Corps in Action on the Opequan" "Early's Army Falling Back Upon Winchester" "Major-General David B. Birney" "Major-General E.  O. C. Ord" "Major-General George Crook" "Major-General Torbert"; a nice full page: "Rebels Moving South From Atlanta" "Major-General Richard J. Oglesby" "View of the State Railroad Depot at Atlanta, Georgia" "Sallyport at Fort Morgan, Mobile Point, After Its Surrender".
The doublepage centerfold is a nice Thomas Nast print with 18 vignettes titled: "The Chicago Platform" is actually a parody of the Democratic Convention for the Presidency, which supported General George McClellan.
The back page has two cartoons; "A British Bantling" and "A Ruined Peace Democrat!!!" Complete in 16 pages.