Home > Back to Search Results > Great Thomas Nast centerfold on the 'Blessings of Victory'...
Click image to enlarge 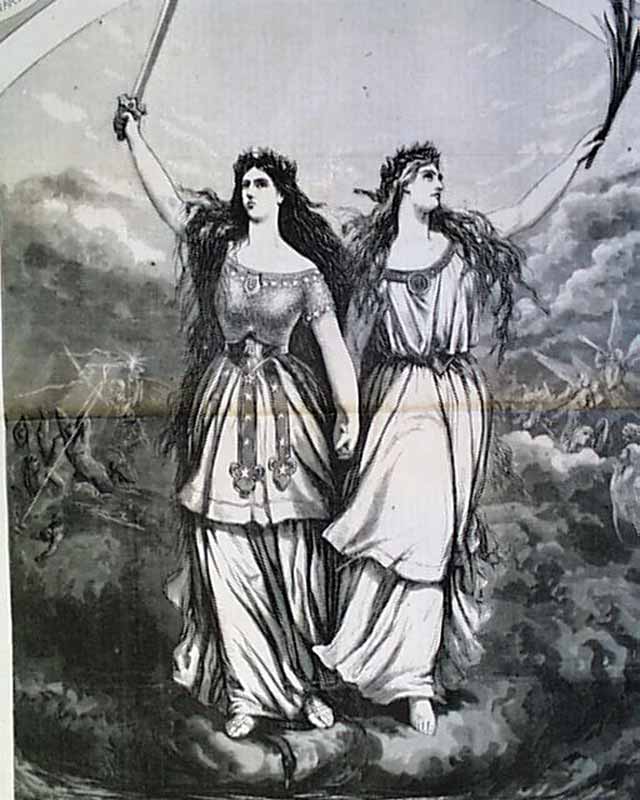 Great Thomas Nast centerfold on the 'Blessings of Victory'...


HARPER'S WEEKLY, New York, Sept. 24, 1864  The front page has prints of: "The Late Rebel General John Morgan" with a biography on him. Also: "Rebel Torpedo Boat" with a related article as well. Other prints within include: "General Grant's Campaign--In The Trenches Before Petersburg" "Plan of the Battle of August 5, 1864" "Fort Morgan Just After the Surrender" "Lighthouse at Fort Morgan" "The 'Brooklyn' Showing the Shots Received on Her Starboard Side During the Engagement of August 5, 1864" "Hon. Reuben E. Fenton, the Union Candidate for Governor of New York" "Burning of the Receiving Ship 'Brandywine' as Seen From the Gosport Navy-Yard, Virginia" "Crow's Nest Signal Station" "Private Miles O'Reilly".
The doublepage centerfold is a very handsome and displayable Thomas Nast print titled: "The Blessings Of Victory" which includes 9 vignettes.
The back page has a cartoon: "Politics Makes Strange Bedfellows". Complete in 16 pages.