Home > Back to Search Results > Print that made Thomas Nast famous...
Click image to enlarge 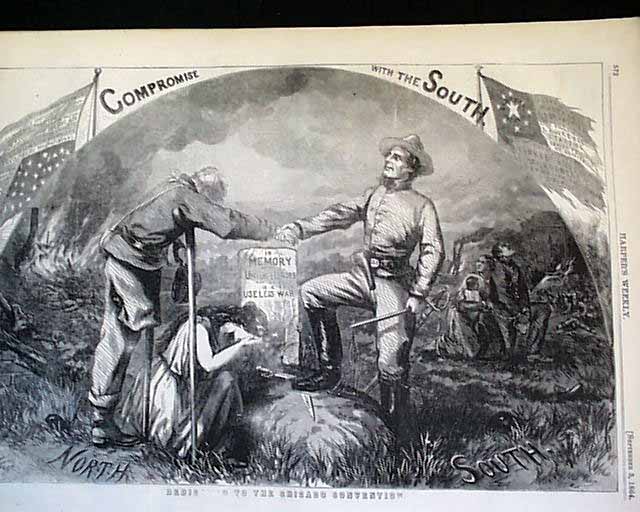 Print that made Thomas Nast famous...


HARPER'S WEEKLY, New York, September 3, 1864  The full front page is taken up with a print: "Gen. Sherman's Campaign--Council of War Held at Gen. Wood's Headquarters".
Certainly the best print in this issue is also one of the more famous by Thomas Nast. This print (see) shows a triumphant Confederate soldier shaking hands with a peg-legged Union veteran as what appears to be Lady Liberty wept over a grave of Union heroes from a "Useless War".  Titled "Compromise With the South" the cartoon blasted the anti-Civil War peace platform adopted by the Democrats. Facing Democrat George McClellan in that fall's election, Abraham Lincoln's Republican Party printed up millions of copies of Nast's cartoon and distributed them everywhere. Nast's popularity skyrocketed and this cartoon was credited with helping turn the tide in favor of Lincoln.
Other prints within include: "The Late Brigadier-General Daniel McCook" "Captain Francis De Gress" "General Sherman's Campaign--Capture of a Rebel Wagon Train by General M'Cook Near Fayetteville, Georgia" "The Late John Grigg, Esq." "Nassau, New Providence, the Principal Rendezvous of the Anglo-Confederate Blockade-Runners" "View of the Tent in Which the Democratic Convention is to be Held at Chicago" "Clement Vallandigham" "Hon. Fernando Wood".
The doublepage centerfold is a very nice view of: ""Farragut's Fleet Passing the Forts and Obstructions at the Entrance of Mobile Bay".
The back page has two cartoons: "Recruiting at Newbern, N.C." and "The Sensation Novel". Complete in 16 pages.