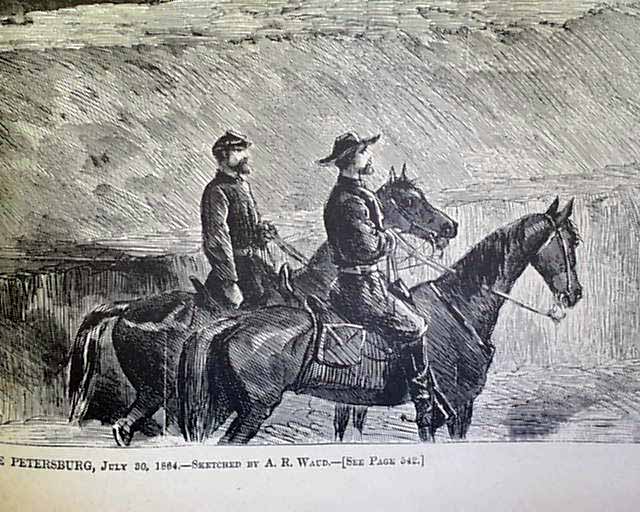 
HARPER'S WEEKLY, New York, August 20, 1864  The front page has prints; "Before Petersburg--Carrying Powder to the Mine" "Col. Pleasant Superintending the Arrival of the Powder" "General Grant's Campaign--Hancock's Corps Crossing the James River from Jones's Neck" plus an article: "Before Petersburg."
Prints inside include a small map captioned: "Map of Mobile Bay and the Defenses of the City"; two full page prints: "General Grant's Campaign--Capture of Four 20 Pound Parrott Guns in Miles's Brigade, Barlow's Division" and "The Christian Commission in the Field".
Other prints include: "Fort Morgan and the Rebel Fleet" "Off Mobile--Shelling a Blockade-Runner" and a full page of 3 view of: "The Ruins of Chambersburg--Bank and Franklin Hotel" and: "...View of Main Street" and "...The Town Hall".
The doublepage centerfold is a sweeping battle scene captioned: "General Grant's Campaign--The Explosion of the Mine and Assault on Cemetery Hill, Before Petersburg".
The back page has a cartoon: "Making One's Friends Useful". Complete in 16 pages.